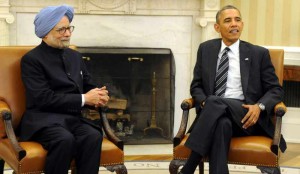 After a farewell phone call to Manmohan Singh shortly after he demitted office, US President Barak Obama also wrote to the former Indian prime minister appreciating his role in strengthening the Indo-US strategic relationship.

On May 17, Obama made a farewell phone call to Singh barely hours after the latter demitted office and described him as one of the few public leaders whom he “admired” and that he would “miss” working with him on a “day-to-day basis”.

In his subsequent letter, Obama appreciated Manmohan Singh “for his efforts that lifted millions out of poverty and positioned India for its transformation into a global leader”.

Obama said he wanted to “respond to your thoughtful letter and put in writing my deep appreciation for your remarkable two terms in office”.

“I have tremendous gratitude for the critical role you have played in defining and expanding the strategic partnership between India and the United States,” said Obama according to a statement issued by the Prime Minister’s Office here.

He said Manmohan Singh’s “leadership helped strengthen a strategic relationship that will have a long-lasting impact on our citizens and is already making the world a safer, more prosperous place. With boldness and vision, during your 10 years in office, you challenged our two nations to deepen our defence ties, engage in civil nuclear commerce, expand trade, and collaborate on clean energy technology while working through our differences.

“We joined together to fight terrorism, prevent the proliferation of weapons of mass destruction, and promote peace in Afghanistan. We also embarked on substantive, strategic exchanges that have helped shape our shared views of global developments, allowing us to coordinate and respond more effectively to breaking events.”

“Your efforts lifted millions out of poverty and positioned India for its transformation into a global leader. I particularly commend your resolve to reach out to Pakistan, which showed the path to a stable, peaceful South Asia.

“I am proud that the United States could play a role in your efforts to build a dynamic, prosperous nation, which I believe will bring great benefit to our countries and the world,” Obama said.