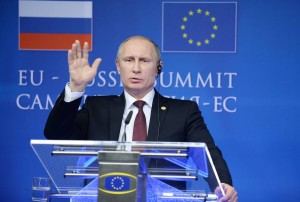 The ongoing Russia-Ukraine stand-off may jeopardise natural gas supplies to the European countries despite Moscow’s efforts to abide by contracts, a senior official said Monday.

“Countries that have no alternative supply (routes) other than the Ukrainian gas transportation system are most at risk,” Xinhua cited Russian Deputy Energy Minister Anatoly Yanovsky as saying Monday.

“It is not a matter of Gazprom wanting or not wanting (to demand prepayment), it is an obligation under the contract. In order to supply gas to Ukraine, Gazprom has to pay custom duties to the Russian budget; that is why it simply must ask for pre-payment,” Xinhua quoted the RIA Novosti news agency as saying.

“We have not received any payments for the gas supplies already delivered (to Ukraine),” he added.

Also Monday, a senior member of the Russian State Duma, the lower house of parliament, said energy supplies have become a political matter in recent years.

“Russia began supplies to Europe 40 years ago during the Cold War, but even then economic reasons and energy demands prevailed over political confrontations,” said Pavel Zavalny, deputy chairman of the State Duma’s energy committee.

The company worries that Naftogas could fail on its transport obligations while withholding some gas allocated for Europe for Ukraine’s own purposes.

Energy officials from the European Union are to meet Gazprom and Naftogaz representatives Monday in Brussels.