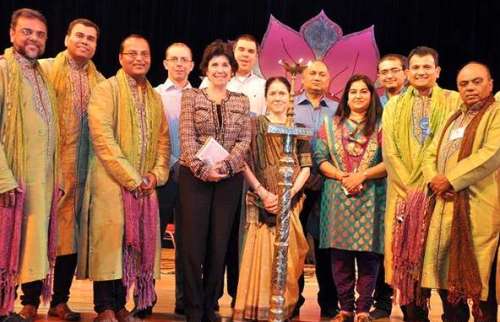 The City of Aurora, a suburb of Chicago organized an evening of music, dance and fireworks to celebrate the festival of Diwali. This makes it the first city in the US to officially sponsor the celebration of Diwali, according to the organizers of the event.

Several thousand Indian Americans attended the festivities, which was organized on the weekend, because the festival falls on a work day here. Traditional folk dances from various Indian states alongwith Bollywood numbers were performed while vendors showcased ethnic Indian jewelery and sold snacks like bhelpuri.

Cash prizes were offered to Indian American children who answered questions on Indian history and culture. The event also included an outdoor fireworks display sponsored by the city. The organizers had to do with battery operated ‘diyas’ inside the auditorium to comply with local fire protection laws.

The event was attended by Aurora mayor Tom Weisner and other local politicians. They noted that the Diwali celebration honored the diversity of the suburb while acknowledging the contribution of the local Indian American community.

Aurora is the second most populous town in the state of Illinois, next to Chicago. It is known as the ‘city of lights’ because it was one of the first cities in the United States to adopt an all -electric street lighting system.

In recent years, Aurora has seen a large influx of immigrants, mostly from the four Southern Indian states. Most of them are information technology professionals who are attracted to Aurora for two reasons-the famed Sri Venkateswara Swami (Balaji) temple, and the Illinois Maths and Science Academy, a school for high achievers.

Next year the organizers have promised an even bigger event. “This year we put together the festivities in barely five weeks. Next year we plan to hold this in an outdoor park which has a capacity of 20,000 people,” said Krishna Bansal, the chairperson of the City of Aurora commission which organized the event.