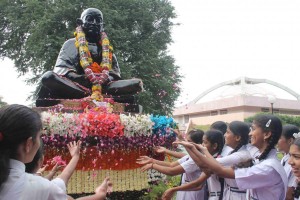 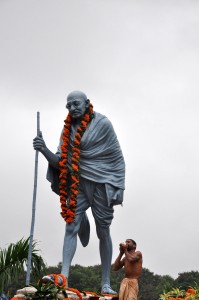 A seven-foot tall bronze statue of India’s freedom movement leader will be the centrepiece of the Mahatma Gandhi Memorial of North Texas with walls inscribed with some of his quotes.

After four years of planning and fundraising, ground was broken at Thomas Jefferson Park in Irving for the memorial last Saturday, according to dallasnews.com.

Haley, daughter of Sikh immigrant parents from India, gave the keynote address at the event. She talked about how Gandhi’s principles of peace and love were just as important in the US today as they were in India during the independence movement.

She also commented on how it was appropriate for the memorial plaza to be funded entirely through private money, as the Indian American population is the demographic least dependent on government subsidies.

According to the memorial team, the 7-foot tall, 30-Inch wide, 1,500-pound bronze statue with powder coated weather resistant material will be installed on a 6-foot tall pedestal in Thomas Jefferson Park spread over 18 acres.

The memorial plaza is structurally designed to host 40-feet diameter platform, with solar panels and LED lighting with a beautiful landscape. The platform will be surrounded by 8-ft granite walls engraved with Mahatma Gandhi quotations, as well as quotations of famous world leaders who were influenced by Mahatma Gandhi.