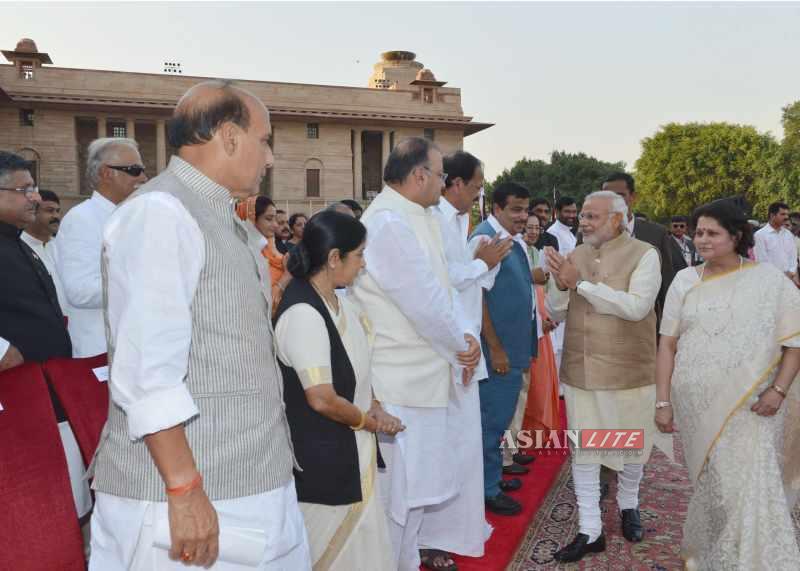 Narendra Modi, India’s 14th prime minister, took oath on Monday at a ceremony held in the open at Rashtrapati Bhavan and attended by the Who’s Who of the nation – including political leaders, business honchos, celebrities and leaders of religious faiths – as well as leaders of neighbouring countries.
The oath of office and secrecy was administered in Hindi to Modi by President Pranab Mukherjee.

There was a certain poignancy to the momentous occasion as the inauguration of a new prime minister happened exactly 50 years after the death of India’s first prime minister, Jawaharlal Nehru.

Present on the occasion of the change of guard was the outgoing prime minister Manmohan Singh, who remained 10 years at the helm when the general election left the Congress battered and reduced to its lowest tally of 44 seats in the Lok Sabha.

A council of ministers, numbering around 45, also took oath.

Among the foreign leaders who attended the ceremony at the forecourt of the presidential palace were Pakistan Prime Minister Nawaz Sharif, Afghanistan President Hamid Karzai and Sri Lankan President Mahinda Rajapaksa.

Congress president Sonia Gandhi, her son and party vice president Rahul Gandhi and former presidents A.P.J. Abdul Kalam and Pratibha Patil were among the over 4,000 people who gathered on the occasion.

“As we devote ourselves to take India’s development journey to newer heights, we seek your support, blessings and active participation. Together we will script a glorious future for India,” said Modi in his message on the upgraded website of the Prime Minister’s Office.

“Let us together dream of a strong, developed and inclusive India that actively engages with the global community to strengthen the cause of world peace and development,” he added.

“I am a firm believer in the power of technology and social media to communicate with people across the world. I hope this platform creates opportunities to listen, learn and share ones’ views,” he said, referring to the upgraded website.