Asian Lite, the best newspaper for NRIs and Indian abroad, will regualrly update the scenario in Delhi tomorrow

Prime Minister-designate Narendra Modi will visit Rajghat on Monday morning to pay homage to Mahatma Gandhi ahead of his swearing-in as the 14th prime minister of India. 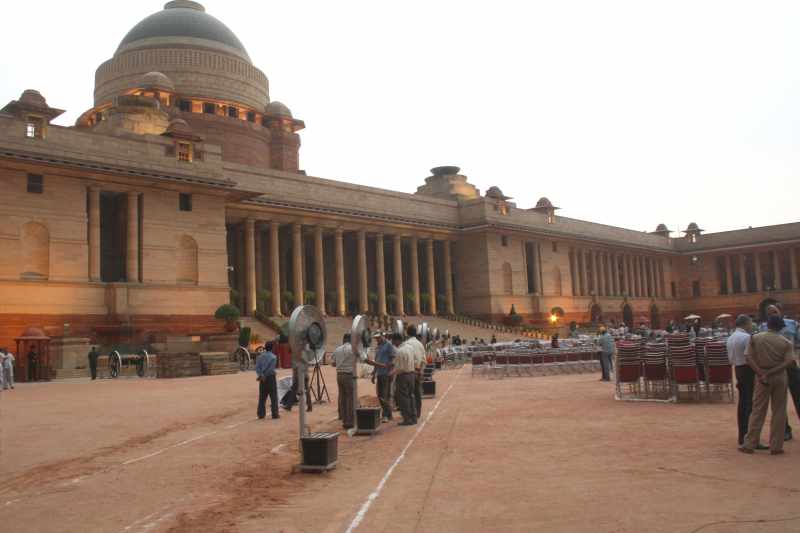 The BJP leader will visit Rajghat at 7.30 a.m. to pay homage to Mahatma Gandhi, said a statement. Modi takes oath at 6 p.m. at Rashtrapati Bhavan.A small and compact cabinet under Narendra Modi appeared to be taking final shape, with BJP leaders Rajnath Singh, Arun Jaitley, and Sushma Swaraj likely to get the top posts, according to party sources.

The cabinet is expected to be compact, said party sources. Restructuring is expected in the government and some ministries are likely to be merged.
BJP president Rajnath Singh appears set to be the next home minister, but internal security may be taken away from the home ministry and kept with the prime minister’s office.
Talks are on over Rajnath Singh’s replacement in the party, with general secretary and former Himachal Pradesh minister J.P. Nadda among the contenders for the post.
While Arun Jaitley is likely to get finance ministry, Sushma Swaraj may get external affairs or defence ministry.
Ravi Shankar Prasad, Najma Heptulla, Sumitra Mahajan and Ananth Kumar are also likely to find place in the cabinet, as are representatives from allies Shiv Sena, and Telugu Desam Party, whose chief N. Chandrababu Naidu also met Modi Sunday. However, coming out of the meeting, Naidu said that a ministerial post is not important.
“I did not ask for any representation,” he said. “We are an ally of the NDA, power is not important, national development is important. Both in Andhra Pradesh and Telangana there are problems. Under his (Modi’s) leadership, we want a solution to these problems,” Naidu told TV news channel CNN IBN.
However, TDP sources in Hyderabad said Pusapati Ashok Gajapathi Raju is likely to be the lone face from the TDP to be inducted into the union cabinet Monday.
This was believed to have been decided at the meeting Naidu had with Modi.
Ally Shiv Sena, however, said it expected “proper” representation in the cabinet.
“Shiv Sena is expecting good positions in the central government. The BJP has assured us that would happen,” said senior Sena leader Subhash Desai.
“We are confident. We are not at all bothered or worried about Shiv Sena not getting a proper share,” Desai told TV news channel NDTV.
Sources said the Apna Dal, which won two seats in Uttar Pradesh, is also trying to find a place in the new cabinet.
Rajnath Singh, meanwhile, met several party leaders, including Maneka Gandhi, Udit Raj, and Vijay Goel as well as Rashtriya Swayamsewak Sangh leader Suresh Soni during the day 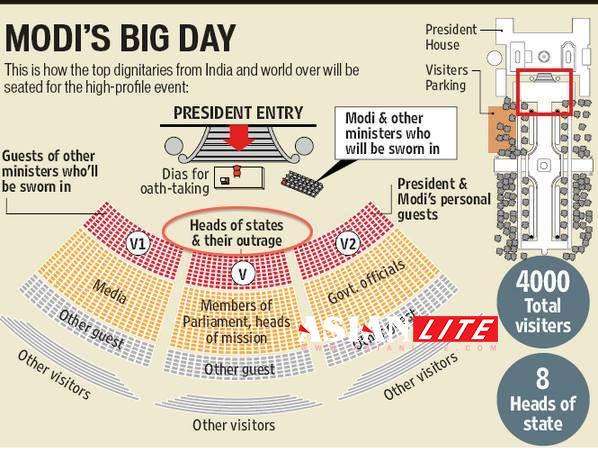 An assortment of vegetarian snacks, including moong dal kachori and dhokla, would be on the table for the high tea to be served after the swearing-in ceremony of Narendra Modi as India’s 14th prime minister at Rashtrapati Bhavan Monday.

The private dinner being hosted later by President Mukherjee for the seven visiting heads of government and Bangladesh parliament speaker besides Modi and his council of ministers would be a mix of vegetarian and non-vegetarian cuisine.

For the non-vegetarians, the fare would be prawn stew, chicken Chettinad and Galauti kebab.

“There has been an effort to get a major dish from each region of India,” said an official. Dal makhani is a dish from Punjab, while potol dolma is a Bengali favourite.

There would be naval bands playing “lively patriotic songs”, while in another first, a commentator would be giving a live bite to liven up the proceedings till the VVIPs arrive. Guests, including media persons, have to be present hours in advance – from 3.30 p.m.

Buses would pick up guests and drop them at the venue. Only the VVIPs would be allowed to come in their cars and that too after 5 p.m.

With very little time between tea and dinner, the foreign guests would be allotted rooms in the presidential palace to “freshen up”.

“The rooms would be given for an hour,” said Paul.