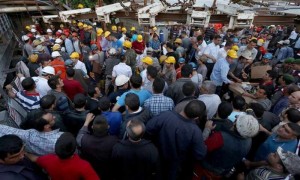 The number of workers confirmed dead in an explosion and fire at a coal mine in Turkey has reached 274.

Officials acknowledge there is little hope of finding survivors inside the mine near Soma city, where roughly 100 men remain trapped some four km from the entrance.

The high concentration of carbon monoxide is preventing rescue teams from going deeper inside the mine, Energy Minister Taner Yildiz said.

Some rescuers too have died already.

Prime Minister Recep Tayyip Erdogan got a taste of people’s sentiment Wednesday during a visit to Soma, where relatives of the dead rushed at the premier, forcing him to take refuge inside a supermarket.

Protestors also clashed with police in Ankara, Istanbul, Smyrna and other cities, while Turkey’s main unions called for a general strike Thursday.

Erdogan promised an investigation into the tragedy, but declined to place blame and insisted that mining accidents “occur all the time”, citing a series of high-fatality mine disasters in various countries between the years 1862 and 1975.

“An inspection of the mine was done in March and there were no irregularities,” he said. “Working without accidents is impossible and this mine is one of the best as far as safety conditions.”

But Cemalettin Sagtekin, a member of the association of engineers and architects, said Turkish miners endure poor working conditions for the equivalent of 400-500 euros ($549-686) a month.

“The cause of the deaths is the uncontrolled ambition of the bosses,” he told CNNTurk. “The engineers who should carry out the regular inspections receive their pay from the firm itself.”

The head of the miners union, Tayfun Gorgun, blamed the disaster at Soma on privatisation.

“There were no deaths when these mines belonged to TKI, the state coal company. The deaths began with the privatisation,” he said.

Turkey’s mining sector suffers an average of 80 job-related fatalities every year. The mine in Soma was acquired by the private company Soma Holding in 2005.

Alp Gurkan, owner of Soma Holding, boasted two years ago about his success in slashing production costs at the mine.