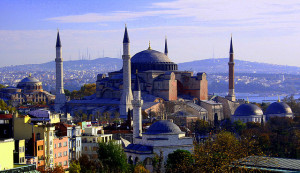 At least 200 people were killed and some 400 workers remain trapped underground after an explosion and fire in a coal mine in Turkey Tuesday, officials said Wednesday.

A total of 787 people were inside the mine in Soma, 250 km south of Istanbul, when the disaster occurred. As many as 363 people have been accounted for so far, including the miners killed, Xinhua reported.

At least 80 rescued miners were injured, including four who were in a serious condition, Turkey’s Energy Minister Taner Yildiz said at the scene as he oversaw rescue operation involving some 400 rescuers.

The accident occurred as the workers were preparing for a shift change, officials said, which might have raised the casualty toll because there were more miners inside than usual.

The explosion occurred at a power distribution unit two km below the surface, which caused the mine’s elevator to stop working. A fire broke out after the explosion.

The Soma Coal Mining Company, the mine’s operator, said they had inspected the mine’s facilities only two months ago and found nothing against regulations.

The latest incident is one of the numerous mining accidents that Turkey has had in recent years. Accidents, cave-ins and explosions have claimed the lives of dozens of mine workers over the years.

Last December, four miners, who were reportedly working at an unlicensed coal mine for 60 Turkish liras (about $30), were killed in the Zonguldak province after an accident.

According to the Chamber of Mining Engineers of Turkey, 80 accidents took place in Turkish mines in 2012, killing 61 people and injuring 91 workers.