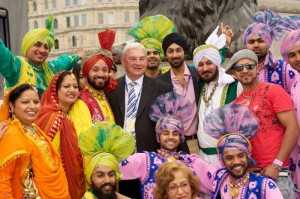 British Foreign Secretary Philip Hammond with External Affairs Minister Sushma Swaraj will inaugurate Pravasi Bharatiya Divas convention Oct 17 in London, the first ever such event to be held in Britain.

A British High Commission release said that the Foreign and Commonwealth Office will host a reception for the British government Oct 17 “celebrating” the country’s Indian diaspora community.

“The reception will mark the first ever regional Pravasi Bharatiya Divas event – the Indian government’s flagship diaspora convention – to be held in Britain,” it said.

It said Deputy Prime Minister Nick Clegg will present the first Britain-India Dadabhai Naoroji Awards to the 2014 winners at the reception.

The two-day regional Pravasi Bharatiya Divas is being organised by the ministry of overseas Indian affairs and Confederation of Indian Industry.

It said the reception will take place in the iconic Durbar Court, at the heart of the old India Office buildings in London.

The Britain-India Dadabhai Naoroji Awards were launched by Clegg during his visit to India in August. The awards celebrate the work of individuals who have made an exceptional contribution in the fields of education, commerce or culture.