The stowaway Afghan Sikhs include 13 children aged between one and 12. The group arrived on Saturday on a ship from Belgium and were said by police to be victims of “people trafficking”. Police said they are “being spoken to about their ordeal” before they are passed on to the UK Border Force. Essex Police said the group members are to be interviewed to find out how they came to be inside the container. 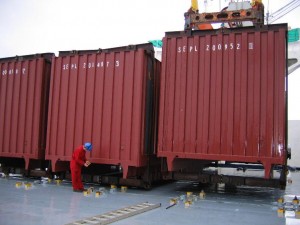 Police has intitated a homicide investigation following the death of the man, who is thought to be in his 40s, the BBC reported.

A post-mortem examination was carried out on Sunday but police say further tests need to be undertaken to establish the cause of death and the container is being forensically examined.

Officers are working with Interpol and other international authorities to try to establish what happened.

Superintendent Trevor Roe of Essex Police said: “The welfare and health of the people is our priority at this stage. Now they are well enough, our officers and colleagues from the Border Force will be speaking to them via interpreters so we can piece together what happened and how they came to be in the container.

“We now understand that they are from Afghanistan and are of the Sikh faith. We have had a good deal of help from partners within the local Sikh community in the Tilbury area to ensure that these poor people, who would have been through a horrific ordeal, are supported in terms of their religious and clothing needs.”

Immigration lawyer Harjap Singh Bhangal told the BBC that the Sikh community in Afghanistan had long complained of harassment.

He said the number of Sikh families has been “dwindling” and they faced verbal and physical abuse.

He said: “As a result Sikhs are leaving Afghanistan, and they feel persecuted, and they’re leaving for other countries in Europe such as Germany, France and the UK.”