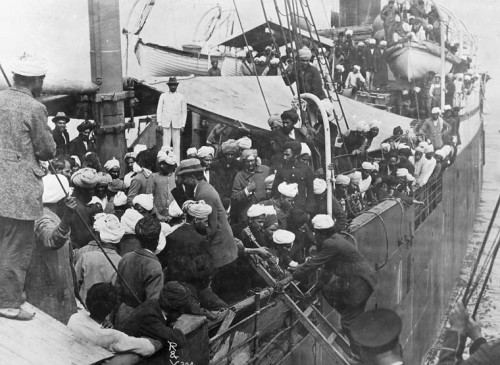 India released a set of special coins of denominations of Rs.100 and Rs.5 launching a year-long centenary commemoration of the 1914 Komagata Maru incident to create awareness about the heroic struggle of Indian migrants against discriminatory immigration laws of Canada.

Komagata Maru, a Japanese ship carrying 376 Indians, was not allowed to disembark its passengers in Vancouver for two months and then forcibly sent back to India where 20 of the prospective migrants were shot dead by police on arrival in Calcutta (now Kolkata).

“By commemorating Komagata Maru we commemorate not only the 376 Indians on board the ship, but also all the Indians who have since the early decades of the last century landed on the shores of other countries in search of greener pastures,” Culture and Tourism Minister Shripad Yesso Naik said at the inaugural function at Vigyan Bhawan in the capital.

Naik said the incident reminds us of a “huge and vital” role played by those who lived away from the country but kept bonds with India intact and alive.

“The overseas Indian community now constitutes a diverse, heterogeneous and eclectic global community representing different regions, languages, cultures and faiths,” he said, adding that “the common thread that binds them together is the idea of India and its intrinsic values”.

The government has constituted a National Implementation Committee to chalk out programmes to be taken up during the year from Sep 29, 2014 to Sep 29, 2015.

According to Culture Secretary Ravindra Singh, a number of programmes such as national and international conferences, publications, development of digital archives and preparation of films and documentaries have been chalked out under this committee.