Following the phenomenal Box Office success of the prequel, director Manmohan Singh presents the follow-up installment of one of Punjabi cinema’s most popular franchises, Aa Gaye Munde U.K. De, releasing in cinemas on 8th August, presented by Trehan Productions and being released by Yash Raj Films. 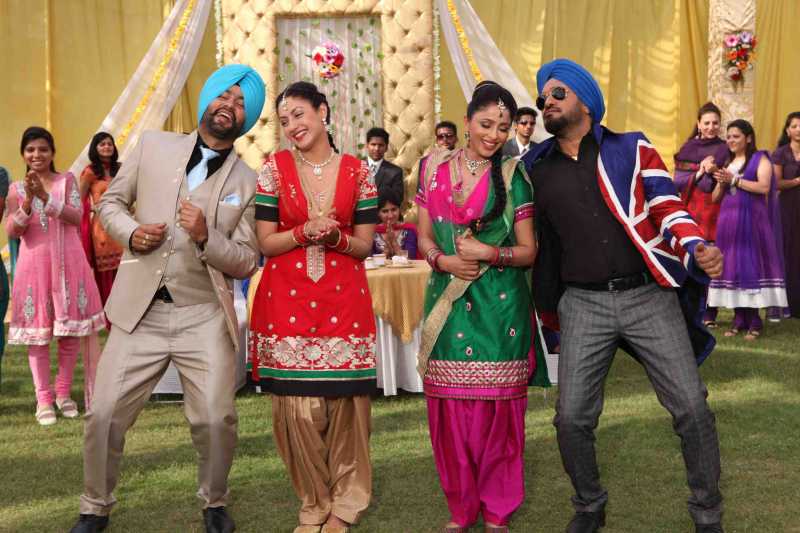 A breezy rom-com that soars high on feelgood factor, Aa Gaye Munde U.K. De marks this summer’s must-watch – an all-out family entertainer for the holiday season. Set in the lush fields of rural Punjab and the beautiful city of Chandigarh, Aa Gaye Munde U.K. De is the much-anticipated sequel to the earlier blockbuster, Munde U.K. De, also directed by the Doyen of Punjabi cinema, Manmohan Singh.

Reprising their charming and loveable roles are the reigning superstars of Punjabi Cinema, Jimmy Shergill, Neeru Bajwaand Gurpreet Ghuggi, with delightful supporting performances courtesy of Om Puri, Khushboo Grewal and Guggu Gill.Harmonising the picture perfect popcorn flick is a catchy soundtrack of Punjabi summer anthems courtesy of composerJatender Singh. Featuring all the ingredients of another Punjabi smash hit in the making, Aa Gaye Munde U.K. De will undoubtedly continue to affirm regional cinema’s status as a force to be reckoned with at the Box Office.

Synopsis: When Roop (Jimmy Shergill) sees Disha (Neeru Bajwa) it’s love at first sight. Both are from the same city, both are young, both are educated and both are perfect for each other, having been born and raised as Punjabi’s. A match made in heaven…. or so thinks Roop.

The grass is always greener on the other side and Disha’s father Dilip Singh (Om Puri), a foreign return Punjabi, believes that only a NRI is a suitable match for his princess. The NRI’s are more educated, classy, cultured and all round worldlier, he believes. For him, the local boys just don’t make the cut.

It is now that Roop must not only hide his true identity from the love of his life Disha but also her father to win over his bride, with a little help from his best friend DJ (Gurpreet Ghuggi).

On a mission to stand up for the local Punjabi boys, Roop decides that he must fake it to make it. He thus enters Disha’s life as a NRI and wins her over, but how far can he pull off this farce before his plan falls apart?

Roop, Disha and the two families take a rollercoaster ride of fun, frolics, traditional values, emotions, love and romance in a bid to find a perfect end to a perfect love story.