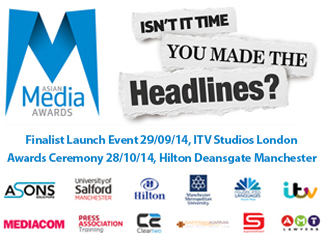 Asian Lite among leading media titles were short-listed for the 2014 Asian Media Awards.  The finalists were announced at an event held at ITV, The London Studios.

The prestigious event is aiming to reward those working in journalism, television, radio, marketing and PR.   The Asian Media Awards take place at the Hilton Deansgate Manchester on 28 October 2014.

The event sponsored by Asons Solicitors and the University of Salford was attended by invited finalists, partners and special guests. Keynote speakers on the night were Yasmin Alibhai-Brown of the Independent and Asif Zubairy, ITV’s Commissioning Editor for Entertainment.

The 2014 Journalist of the Year category features some of the leading media professionals from across the UK. The category is made up of reporters from Sky News, The Evening Standard and the Mail on Sunday. MediaCom and Press Association Training are supporting the event with judging panel members from Al-Jazeerah English and Blue Rubicon among others.

A special feature into the lives of first generation immigrants is also included in the list this year as is Robb Leech’s eye-opening film ‘My Brother The Terrorist.’

In the radio sections the BBC Asian Network again led with a number of nominations. However, there was a focus on smaller regional radio stations going above and beyond the communities they serve. Both Awaz FM Glasgow and Sabras Radio of Leicester were named in the Regional Radio Station of the Year award alongside Sunrise Yorkshire and Asian Star Radio of Slough.

Sunrise London which is looking to re-invent itself after an uncertain year is also named in the Radio Station of the Year category.

The London Indian Film Festival is included in the Best Live Event category. Two plays which aim to challenge controversial subject matters are also included. The first of which is ‘Nirbhaya’ a stage production by Ensemble. The second is ‘States of Verbal Undress’ by Manchester based RASA. The play is written by Rani Moorthy.

The highly contested Media Agency of the Year award features five of the UK’s leading PR and media agencies. 2013 winners Media Moguls are again nominated alongside Mediareach who were also shortlisted last year.

New on the list this year are Curzon PR, Spritz Creative and Here&Now365.

Four of the most innovative Asian news, entertainment and music websites are featured in our Best Website category this year. The list includes Desiblitz.com, Bizasialive.com, Simplybhangra.com and UKAsiaonline.com. 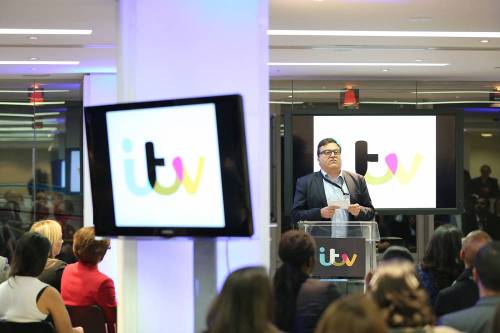 The Best Blog and Commentary category rewards four sites each catering for a range of readers. Look! A Singh.com aims to celebrate Sikhs in the media. AsianCulturevulture.com includes articles to showcase creative work by South Asians. The RedNotebook.co.uk is a fashion and style blog and columnist Priya Mulji’s Blog explores issues relating to love, dating, relationships and lifestyle.

Journalist of the Year

A Family Without A Child (BBC Radio 4)

My Brother The Terrorist (Grace Productions)

TV Report of the Year

Why Muslim Women Choose To Wear The Veil (Channel 4)

Publication of the Year

TV Channel of the Year

Radio Station of the Year

Regional Radio Station of the Year

Radio Presenter of the Year

Media Agency of the Year

Media Professional of the Year

Media Personality of the Year