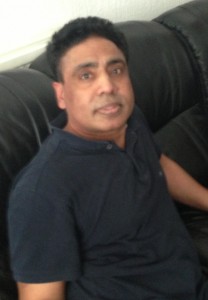 Police have issued an image of a man they would like to speak to in connection with a series of blackmails and high value frauds.

The suspect uses the believed false name of Kamal-Ji and purports to be a devotee of Sai Baba.

Once he has gained the victim’s trust he asks the victim for money to purchase items, defrauding them of tens of thousands of pounds, which is paid in cash or to bank accounts.

The suspect is described as a dark skinned Asian male, of stocky build, aged in his early 40s, approximately 5’4” to 5’6” tall, with short black hair which is spiky or wavy on top.

He walks with a limp which may or may not be put on, and speaks softly, usually in Hindi.

He is known to wear a traditional Indian white kurtha pyjama.

Detective Sergeant 601 Mark Sinski, who is investigating the incident said: “The suspect has advertised his services in Leicestershire by radio and newspaper adverts and on flyers. Subsequently his services have then been recommended by word of mouth with some victims living out of the county.

“He is known to have previously used addresses in Thurmaston, Syston and near to Parker Drive.

“We are looking into the possibility that the suspect has previously operated in other areas, and may have recommenced his activities elsewhere in the UK. It is also possible that he may now have left the country.

“I would appeal to anyone who believes they know the identity of the man in the image to get in touch. He could have vital information which will help with our enquiries.

“Alternatively, if this is you, please contact us immediately.”

Anyone with information in relation to any appeals featured on this site is asked to contact the relevant officer on 101, follow the instructions to leave a message for the officer and when prompted key in the officer’s identification number. Alternatively, contact Crimestoppers, which is free and anonymous, on 0800 555 111.

Calls to 101 cost 15p for the entire call from both mobile ‘phones and land lines. Please note some mobile ‘phone service providers may charge for calls to Crimestoppers.