Baroness Warsi has distanced herself from the education secretary’s response to allegations of an Islamist plot to take over Muslim-majority schools in Birmingham – and took a jab at Gove for not having any relevant life experience on the issue reports Huffington Post. 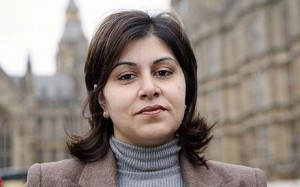 The senior Foreign Office minister, who also serves minister for faith and communities, said in an interview on Tuesday afternoon that the education secretary had to ensure he did not “make matters worse” by alienating Muslims.

It isn’t just Theresa May who seems to take issue with Michael Gove’s approach to tackling extremism in British schools.

In a speech to MPs yesterday, Gove said that all schools would in future be required to promote “British values” as it was confirmed that five Birmingham schools have been placed into special measures in the wake of the so-called ‘Trojan Horse’ extremism allegations.

Ofsted inspections, conducted in the wake of claims of a plot by hardline Islamists to infiltrate schools in Birmingham, found that a “culture of fear and intimidation” has developed in some schools and, in several, governors exerted “inappropriate influence” over how they are being run.

Warsi, who was the first woman Muslim to serve in the cabinet, told BBC Radio 4’s World at One on Tuesday that it was important for ministers not to use “sensationalised language” when responding to the affair. She made the comments after being asked about Gove’s desire to “drain the swamp” of Islamist extremism. Warsi replied: “I’m not going to comment on the language other people have used.”

The FCO minister also dismissed suggestions that there was a link between conservative Islam and Islamist extremism. “I don’t think there is necessarily a link and I’ve yet to see definitive piece of evidence which shows that religiosity in any religion equates terrorism,” she said.

Warsi, however, argued: “There are many of us who don’t just deal with it in an academic exercise on papers in Whitehall. I mean, I’ve been attacked by extremists on the streets of Luton for what I believe in.

She said a conservative religious upbringing, such as the one she had growing up in Dewsbury, was not the same thing as promoting extremism and said “freedom of religion” was an important British value that needed to be upheld.