Hospitals in England will be expected to provide higher standard of food under new measures. The new standards, enforced through legally-binding NHS contracts, will focus on quality, choice and promoting a healthy diet for patients and staff, the BBC reported. Hospitals will also be ranked on the meals they prepare. 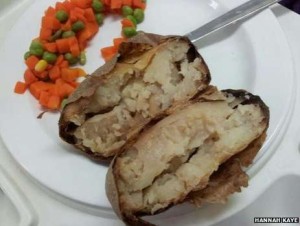 The Campaign for Better Hospital Food called the changes “woefully inadequate” and hard to enforce. Both the Scottish and Welsh NHS already have nutritional standards in place. The chairman of charity of Age UK, Dianne Jeffrey, has been working with the Department of Health to produce the new NHS standards for England, the report added.

She said “hospitals are not five-star restaurants,” but meals were an important part of a patient’s recovery.But Labour warned the rules could be ignored “without proper enforcement”.

The new standards include:

Patients will be assessed for malnutrition when they are admitted and there will also be a greater responsibility placed on staff to ensure patients are well-fed. Ms Jeffrey said there had been reports of patients being unable to feed themselves or even reach a glass of water.

She told the BBC: “When a person is in hospital they are in a very vulnerable state. It’s very important that the food is attractive, it’s appetising, it’s palatable, it’s nutritious, it meets the cultural and social needs of patients and also meets their clinical needs.”

“Under the changes, hospitals will be ranked according to quality and choice of food, whether the menu is approved by a dietitian, the availability of fresh fruit and food between meals, the variety of options at breakfast – which should include warm food, and the cost of the food provided. The rankings will be published on the NHS Choices website, the report said.

But the Campaign for Better Hospital Food told the BBC that the government had “pulled the wool over our eyes”. Alex Jackson, the campaign’s co-ordinator said: “We want to see hospital food standards set down in legislation, similarly to school food standards, and therefore universally applied to all hospitals and protected by publicly elected representatives for generations to come.

“But the government still refuses to do this and has only committed to including the standards in NHS commissioning contracts, which are long documents full of clauses that without proper enforcement and monitoring can be ignored by hospitals.

“The government may have inserted a new clause in a legal document, but that won’t be what most people consider to be legally-binding. It’s woefully inadequate.”