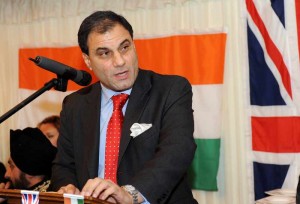 The Generation-UK India initiative to encourage 25,000 British students to travel to India over the next five years was launched here by Indian-origin British entrepreneur and life peer Lord Karan Bilimoria.

Under the scheme, designed to “future-proof the UK-India relationship”, British students will travel to India to work as teaching assistants in schools or as interns with companies, or to join a “cultural immersion” programme of experiencing India.

“One of the programmes is to experience India from an immmersion point of view, to learn about Indian culture, the country, by living in India. These are people, who in future will do business with India, live in India and work with India,” Bilimoria said.

“Its very powerful, looking very far ahead. The links, the contacts, the relationships that they build while they’re here, even for Indians going to the UK these will be points of contact to build bridges between both countries,” Bilimoria, who is the founding chairman of the UK-India Business Council, added.

Placements arranged under the scheme will last for six months. The students are required to bear the cost of travel from Britain but will be provided accommodation. They will also receive a contribution towards their food and travel costs.

Pointing out that a similar Britain-India Research Programme has had overwhelming response, Bilimoria said: “We need our students to go out and become more global. That’s going to help our students better themselves, become more competitive and give them the huge advantage in life, which gives Britain a huge advantage.”

Bilimoria, as chancellor of the University of Birmingham was here as part of a delegation led by British Universities Minister Greg Clark and included Birmingham University Vice Chancellor David Eastwood.

“Student mobility is a proven means of building long-lasting ties between nations, but the UK nowadays welcomes around 300 Indian students for every British student going to India. That imbalance needs to be addressed,” Eastwood told IANS, describing the aim of Generation UK-India.