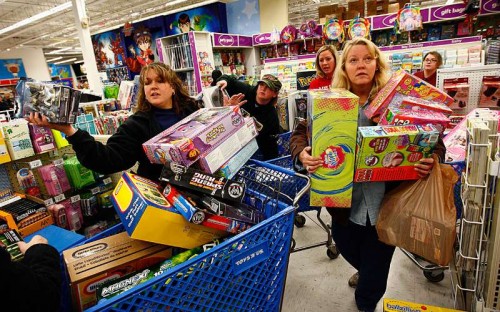 Police have been called to supermarkets across the country and shoppers have complained about websites crashing as the US Black Friday retail phenomenon becomes ever more popular in the UK.

Sales began at midnight with hordes of bargain-hunters descending on stores in a rush to pick up goods ahead of Christmas reported Sky News.

Police were called to at least four supermarkets in London alone because of overcrowding while shoppers took to Twitter to describe “carnage” in stores, with some reports of people being stripped of cheap TVs and other goods by rivals in the scramble.

Queues were seen up and down the country and frustrations boiled over.

In Salford, officers arrested a man for allegedly threatening to “smash” a staff member’s face in.

Poor security numbers have been criticised by both police and shoppers alike.

Many choosing to go online instead found heavy traffic had overcome websites including Tesco Direct and Currys.

Currys appeared to be making people queue as customers were told when access would be available to them.

Black Friday was introduced in the US on the day after the Thanksgiving holiday and was so-named because brisk business was said to have helped retailers back into profit – into the black.

UK retailers are expecting their biggest day of spending this year.

Visa is predicting that £518m will be splashed out on its cards alone, and analysts believe that almost half of UK shoppers are planning to snap up a Black Friday deal.

By the end of the day, 8.5m transactions will have been made online – a 22% increase compared to 2013 figures.

And the shopping frenzy is expected to continue right through until Monday, with estimates that £1.7bn will be spent during the so-called “cyber weekend”.

More retailers have been wheeling out their best deals to lure Christmas shoppers, after Black Friday offers caused a gold rush at the tills last year.

The craze was introduced to the UK by Amazon back in 2010, with Asda joining the frenzy in 2013. This year, the supermarket is foraying into big-ticket items such as quad bikes, with some products carrying a hefty price tag of £3,500.

John Lewis is expecting its website traffic to quadruple between midnight and 8am, while Currys PC World is preparing for an order to be made every second.

Game has also made a concerted effort to appeal to devoted Black Friday fans, by opening its stores for three hours from 12.01am.

London’s Westfield shopping centres are expected to be at their busiest this weekend, but bargain hunters are being reminded to “keep their cool”.

John Hannett, from the shop workers’ union USDAW, warned: “Black Friday can be very difficult for staff. With overcrowded shops and highly excited customers, sometimes tempers flare and things can get out of control.