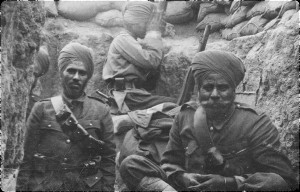 Baroness Warsi unveils plaques commemorating 175 men from overseas who were awarded the Victoria Cross during World War One.

Today, as part of the Government’s First World War Centenary Programme, HRH The Duke of Kent and Senior Minister of State in the Foreign Office and Minister for Faith and Communities, Baroness Warsi, unveiled commemoration plaques for the 175 men from overseas who won Britain’s highest military honour, the Victoria Cross, for service in the First World War.

The 11 bronze memorial plaques, which have been displayed to the public for the first time at an event at Lancaster House in London, are inscribed with the names of the Victoria Cross holders and will be sent to the recipients’ home countries and displayed at a prominent location as a symbol of the gratitude that is felt towards them by the people of the United Kingdom.

Two of the only nine Victoria Cross holders alive in the world today, Sgt Johnson Beharry VC and Australian Cpl Mark Donaldson VC, also attended the launch of the plaques.

It is important to remember this was a truly global war, one which pulled in people from every corner of the earth. Sacrifices were made not only by people in the United Kingdom but by many millions across the world: whether it was the large proportion of Australian men who volunteered to fight in a war far from home, the 1.2 million Indian troops who took part in the war, or the essential support which came from the islands of the West Indies. It is truly inspiring that so many countries came together 100 years ago to uphold our way of life. This was a war which saw extraordinary courage and sacrifice from an entire generation.

This year, we are marking our gratitude to 175 men from 11 countries who demonstrated the utmost bravery “in the face of the enemy” during the First World War. These extraordinary men were awarded the Victoria Cross, Britain’s highest award for valour for their actions during the War. We shall honour them by engraving their names on bronze memorial plaques, to be presented to their home countries, sending out a powerful message that people of all backgrounds and faiths can unite in the name of a common cause.

I am determined that we ensure that people of all backgrounds and of all generations learn about the courage and heroism of their forefathers a hundred years ago.

Sgt Johnson Beharry VC, was awarded the VC for Service in Iraq, and Australian Cpl Mark Donaldson, was awarded his for service in Afghanistan. Both attended today’s event at Lancaster House.

Other guests included descendants of the VCs being honoured, members of the Prime Minister’s Advisory Board on the First World War, representatives of the countries concerned, and some young people from Youth United representing the various cadet forces in this country

This is an extension of the HMG programme to honour UK-born VC recipients with a commemorative paving stone in their home town. The bronze plaques were made at a family-run artisan foundry in the Peak District, Leander Architectural, and use the same design as the flagstones, a design that was chosen through a nationwide competition in 2013.

After the launch, the plaques will be sent to their countries where we intend for them to be displayed in a prominent public location, eg Arlington Cemetery for the US plaque; the Australian War Memorial for the Australian one; Cape Town Castle for the South African plaque etc.

Later in the year, the FCO will be publishing an online digital archive of all the overseas Victoria Cross recipients.

On 4 August 2014 it will be 100 years since Britain entered the First World War. Within government the Department for Culture, Media and Sport is leading plans to build a commemoration fitting of this significant milestone in world history. As the Prime Minister made clear when he launched the programme in October 2012, the main theme will be remembrance with a particular focus on bringing the centenary alive for young people. There will be a number of national events across the four years, as well as cross-Government programmes to help deliver this.