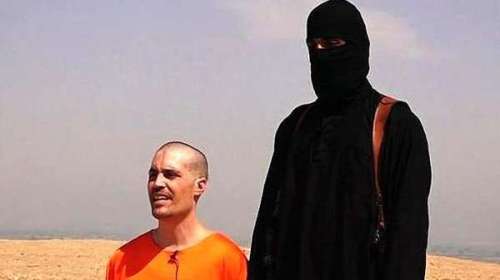 The Islamic State militant who appeared in a video showing the execution of American journalist James Foley last month was known to British intelligence officials as a collector for London-based Arab charities before he traveled to Syria over a year ago, according to Fox News.

The Daily Mirror reported Tuesday that the jihadist, known as “John” because of his association with a group of three other Islamic State fighters called “The Beatles” by hostages, had been identified by the British security service MI5. The paper also reported MI5 has briefed FBI agents who have traveled to the U.K. seeking more information on “John” and to arrest his associates.

“MI5 has identified this man and they have known exactly who he is for some time,” the paper quoted a source as saying. “He was even being looked at before he travelled abroad. “At the time he was considered a very low-level risk because he was merely believed to be making street collections. Like so many jihadists before him, he then seems to have become radicalized almost overnight and disappeared to travel to the Middle East.”

The Mirror reported Monday that U.S. intelligence analysts have used facial recognition technology to provide an image of “John” based solely on the man’s eyes.

“We are 99.9 percent certain now as to who ‘John’ is,” an American source told the paper, “but investigators have had to tread softly in charting and approaching his wider network in the U.K.” British intelligence officials told the paper that they would reveal the man’s true identity “within days.”

“John” came to global prominence in the video depicting Foley’s beheading that was released on August 19. Speaking in a British accent with a distinct London inflection, “John” addressed President Barack Obama, saying that Foley’s death was in response to airstrikes carried out by the U.S. against Islamic State, also known as ISIS, in Iraq.

The paper also reported that intelligence officials believe they have identified the other two main members of “The Beatles.” The group has beheaded Foley and fellow American journalist Steven Sotloff and has threatened to kill British hostage David Haines.

It is not clear whether “John” actually carried out Foley’s beheading or whether his appearance in the video was strictly for propaganda purposes. A similar video shows a masked militant beheading Sotloff, but it is also not clear that he and “John” are the same person.

Meanwhile, the Mirror reported that the FBI, working with local police forces, had identified twelve suspects who helped “John” by providing him with money and contacts, as well as assisting him with travel to Syria.

The Mirror reported that the suspects are all British and most of them are based in the West Midlands of England. Some of them are already known to British security sources, having been linked to previously foiled terror attacks on the U.K.