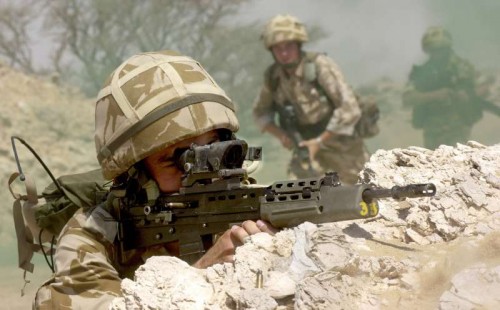 British troops fighting the Ebola outbreak in West Africa are being given an anti-malarial drug banned in the US, putting them at grave risks, a report said .

The British ministry of defence has refused to stop using the controversial drug mefloquine, which is known to cause psychotic disorders, including suicidal tendencies among users, The Independent reported.

Lariam (the drug’s brand name) is among the anti-malarials being given to the 800 British service personnel currently deployed in Sierra Leone on Operation Gritrock.

Fears over the risks of psychosis and suicide prompted the US military to declare the drug as a “drug of last resort” in April 2013, and the US Special Forces Command banned its use more than a year ago.

The British defence ministry admitted that it continued to prescribe mefloquine as “part of a range of malaria prevention treatments”.

Officials acknowledge that the drug has the potential to cause “side-effects and adverse reactions” and say that the “exact choice of drug” is dependent on factors such as where people are being sent, the health of the users and their health history.

It is understood that at least one member of the British military in Freetown, Sierra Leone, has suffered “night terrors” and hallucinations after taking mefloquine.

The risk of “neuropsychiatric side-effects” is well-established, according to the Medicines and Healthcare Products Regulatory Agency, which has received more than 2,200 reports of “adverse reactions” to the drug since 1986.

In a letter to doctors in October last year, Roche, the makers of Lariam, warned that “hallucinations, psychosis, suicide, suicidal thoughts and self-endangering behaviour have been reported”.

The dangers of the drug were revealed by The Independent more than a year ago.

Senior British politicians and military figures criticised the defence ministry for continuing to use it.

Maj. Gen. Patrick Cordingley, commander of the “Desert Rats” in the first Gulf War, said: “I’m appalled to hear the MoD (ministry of defence) is still allowing it to be prescribed. I have personally suffered the consequences of taking it and in my case it was extremely unpleasant… I found it very frightening.”

A defence ministry spokesperson said: “Our medical advice is based on the guidelines set out by Public Health England.”

However, Mefloquine is not being given to medical staff sent out by Public Health England.