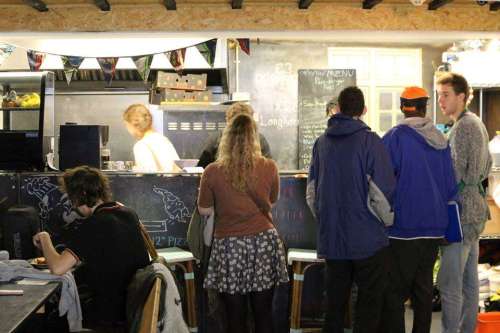 A cafe opened this week in the English city of Bristol, dishing up meals made from thrown-away supermarket food rescued from waste skips.

Discarded food from some of the city’s restaurants is also being recycled at Bristol’s newest eatery, Skipchen, a play on the word kitchen, Xinhua reported.

Eager diners are happy to munch their way through thrown-away food, especially as they themselves will decide how much, if anything, they should pay for their meals.

Skipchen is being run as a not-for-profit cafe by campaigners who want to highlight the amount of edible food thrown away every day.

Cafe manager Sam Joseph said: “We have a real mix of people coming to the cafe and they sit on two long tables. You could have a businessman sitting next to someone who is a homeless person.”

“People sometimes think they will be taking food from the needy when they come to us but the truth is there is so much to go round. People used to share food in the past with their neighbours, but there’s now embarrassment around it. We’re offering a way to stop it going to waste.”

The cafe has already made a deal with a leading restaurant chain to take surplus chicken from its branches in the local area.

Skipchen is based in Stokes Croft, a wealthy suburb of Bristol, which has already seen the arrival of trendy restaurants and cafe bars.

“The ultimate aim is to put ourselves out of business; if we get to the stage where there is no surplus food then there will be no need for us to be here,” Joseph said.

“We go around the supermarkets when they are closing for the night and the unwanted stock is being thrown out. I think there is nothing wrong with taking food that would be thrown out and serving it to people who cannot afford to eat. I think it would be immoral and unethical to make a profit from the cafe, what we are trying to do is make a statement,” he added.

The menu in the cafe is short and to the point and is determined by what the staff can get their hands on at any given time.

All staff members work voluntarily, the idea being that food is mainly redistributed to people who need it the most.

Some volunteers at Skipchen previously helped set up the country’s first thrown-away food restaurant in Leeds, capital of Yorkshire in northern England. That establishment is currently serving 100 meals a day.

Diners at Skipchen are happy with their cheap meals, and delighted they can tuck into normally expensive luxuries such as lobster at such a throwaway price.

Meanwhile, food health officials say as the cafe is not charging diners for their meals, no laws are being broken.

Food and welfare charities have highlighted the mountain of fit-to-eat food thrown away every year by supermarkets and the food industry, usually because the food is perishable.

That food mountain is estimated to be between 15 million tonnes and 20 tonnes a year. The retail value of the discarded food is valued at around 20 billion pounds ($32.4 billion).