Protest groups targeting supermarkets over the sale of Israeli products risk importing Middle Eastern violence to British high streets, Jewish have leaders insisted. In a joint statement the leaders of Britain’s main Jewish community organisations condemned a series of incidents at shops selling Israeli goods and kosher food accusing the organisers of intimidation and stirring up tensions, accroding to Telegraph. 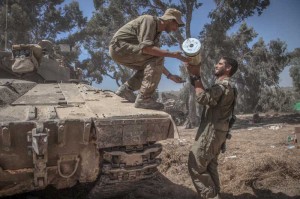 They specifically challenged trades unions to distance themselves from the protests which prompted one branch of Sainsbury’s in central London temporarily to clear its shelves of kosher food amid fears that anti-Israel protesters were about to ransack the shop. In a joint intervention the Board of Deputies of British Jews, the elected body representing the British Jewish community, and Jewish Leadership Council (JLC), which includes the heads of Britain’s main Jewish organisations, said boycotts and intimidation were “especially troubling” for British Jews, adds the report.

“The protesters behind this campaign have no interest in securing a just and lasting peace for Israelis and Palestinians and through such actions, risk importing the Middle East conflict to the UK, dividing local communities,” they said.

The statement adds: “The community calls on retailers not to discriminate against or boycott any goods, products or suppliers, which would give the message that violence and intimidation work – an especially troubling situation for Jewish people in the UK.”

Gillian Merron, chief executive of the Board of Deputies, added: “Our shops are no place for a political battle ground.

“As a society we should be bringing communities together – importing conflict through produce on the shelves will neither serve us, nor the prospects of peace for the Israelis or Palestinians”.

On Monday night the National Union of Students, which supports a boycott of companies with links to the Israeli military, issued a short statement explaining its boycott policy and adding: “NUS has reaffirmed its commitment to raising awareness of and combating all forms of racism including but not limited to, Islamophobia and anti-Semitism, that may and have occurred in response to recent events in Israel and Palestine.”