Dulmial, Pakistan, popularly known as  ‘the Village with the Gun,’ paying tributes to  the Soldiers of the First World War, 100 years on…reports Dr Irfan Malik and Michael Noble, The Centre for Hidden Histories, University of Nottingham

A nineteenth century cannon sits at the centre of a Pakistani village. Here we take a look at the story of the Dulmial Gun.

Dulmial is a village approximately  100 miles south of Islamabad, in the Salt Range region.  A century ago, the area was part of British India, which meant that its inhabitants were drawn into the Great War on the side of the Allies. A settlement steeped in military history, Dulmial sent 460 of its men to fight in the British Army, including both of Dr Malik’s  great grandfathers. The largest single participation of any village in Asia. Nine gave their lives. In recognition of the significant military service and sacrifice, in 1925 the British Government offered Dulmial an award of their choosing.  The man in charge of choosing was Captain Ghulam Mohammad Malik, the highest ranking and most decorated soldier of the village. The Captain was a man of great experience, having commenced his military life in the Derajet Mountain Battery and participated in Lord Robert’s famous march from Kabul to Kandahar in 1880. His photograph and achievements are documented in the book by Brig.Gen. Graham  ‘The History of the Indian Mountain Artillery’ in 1957. A career soldier, he eschewed the British offers of land, money and water facilities, choosing instead to have Dulmial’s contribution recognised with the presentation of a cannon.

The British agreed to this selection and provided Dulmial with a twelve pounder. The cannon itself was made at Carron ironworks, in Falkirk, Scotland in 1816. It’s stand was built in Cossipore Gun Foundry, India under the leadership of Captain A. Broome, in 1847. The gun was first collected from the First Punjab Regimental Centre in Jhelum, from where it was carried by train to Chakwal. There the gun was dismounted and loaded in a cart to be pulled by three pairs of oxen for the remaining 28 kms. The roads were semi-mountainous and the passage was difficult. It would take the ox carts 2 weeks to cover the distance. From 5 kms out, at Choa Saiden Shah, the route became more difficult still and Dulmial had to dispatch 5 additional pairs of oxen to relieve the initial 6 and complete the gun’s journey.

Safely in Dulmial, the gun was place at the centre of the village and a photograph taken with the local commissioned officers. It remains there today, a reminder of the contribution that Dulmial made in the First World War. 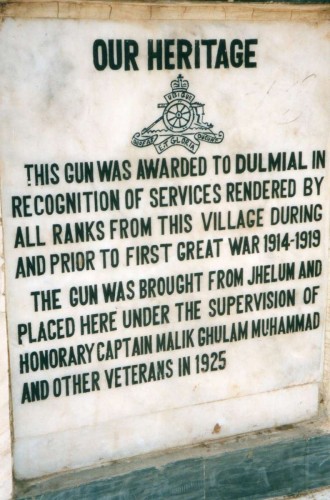 Dulmial is now known within Pakistan as the ‘village with the gun’, but is rather less well known in the UK. This is because little has been written or published about the village in English. Dr Irfan Malik in collaboration with Michael Noble, The Centre for Hidden Histories, University of Nottingham aims to research the First World War history of the village as it played such an impressive part during that period. Since that time Dulmial has continued to produce many generations of high ranking, distinguished  Army officers. It is our intention to bring this hidden history to a wider audience and help to share the reasons of just what a nineteenth century Scottish cannon is doing in the Salt Range region of Pakistan.

After informing the Foreign and Commonwealth Office in London of Dulmial’s  significant  history, several representatives of the village have been invited to attend the First World War Centenary reception at the British High Commission, Islamabad, Pakistan, to be held in November 2014. This will be a great honour and privilege for the inhabitants and worldwide descendants of Dulmial.