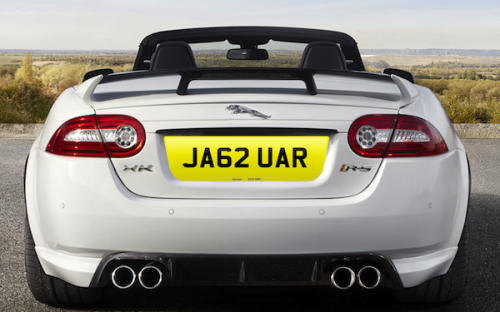 DVLA Personalised Registrations’ 25th Anniversary Auction later this week could prove to be a battle of the supercar brands in terms of which particular lot comes out on top as the historic sale’s most expensive.

While there are 1,600 lots aimed at all tastes and budgets listed in the three-day sale being held at The Vale Resort, near Cardiff, from Wednesday, arguably two with clear links to McLaren and Ferrari could well generate the greatest attention.

First up will be MC14 REN – which has clear links to the legendary company’s name – and is listed with the auction’s highest reserve of £5,000. Its possible success is fuelled by the sales earlier this year of MCL 650Sand 650 S, in relation to the McLaren 650 S supercar, which collectively made more than £56,000.

However, it is true to say, there are great expectations surrounding 25 O, the latest in a long line from the O-series which alone has reaped millions for HM Treasury.

The registration’s value is potentially increased because of its direct correlation to the Ferrari 250 GTO, which, at £22.8 million, became the world’s most expensive car ever sold at auction. Indeed, according to the national weekly publication Auto Express, five of the 11 most expensive cars ever sold at auction belong to the Ferrari ‘250’ family.

As part of DVLA Personalised Registrations’ 25th Anniversary celebrations, one lucky registered bidder who’s signed up for this month’s live auction being held at The Vale Resort near Cardiff will drive away in a brand new Mini One car.

The free-to-enter prize draw is being offered to every registered bidder at the three-day event commencing on Wednesday, November 26, along with those who registered to bid during the auction held at Twickenham in September.

It is the first time such a prize has been offered and reflects the extent of the historic event being held almost  25 years to the day since the Agency started its Sale of Marks scheme which has generated more than £2.1 billion for the Treasury.

With the auction being staged a short distance from Cardiff, there’s undoubtedly a distinctive Welsh feel on offer, arguably the most significant being WEL 55H, especially considering WEL 5H went under the hammer for an emphatic £27,200 the last time DVLA Personalised Registrations staged an auction in the country in April 2008.

Other Welsh-themed registrations include several Cymru-related registrations such as CY58 MRU, CY59 MRU and CY60 MRU along with WA11 LES, W44 LES and W444 LES. There’s also RHY 1L for those with a close association with the popular North Wales seaside resort. Other popular Welsh-related names being auctioned include, OW13 ENS, RH14 NNA and RH14 NON.

Jody Davies, DVLA Personalised Registrations’ Events Manager, said: “While we don’t believe for a moment that either MC14 REN or 25 O will break our record for an individual registration currently held at £357,000 for1 D, we are confident they’ll each create a commotion when they come under the hammer later this week.”