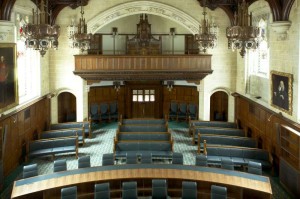 Former Indian Foreign Office Minister Shashi Tharoor and best-selling author and historian William Dalrymple will join in a unique debate marking the 400th anniversary of the beginning of formal relations between India and Great Britain.

The event titled as Project 400 – The Empire Debate will take place on Thursday 18 September 2014 at Supreme Court of the United Kingdom, Parliament Square, London

Dalrymple, one of the world’s pre-eminent experts on India, and fellow author and columnist Tharoor will be joined by several other distinguished public figures during the ‘Empire Debate’, to be held at the UK Supreme Court in London on Thursday 18th September.

Under discussion will be the motion ‘The Indian sub-continent benefited more than it lost from the experience of British Colonialism’.

During the three-hour session the distinguished panel will aim to explore the legacy of colonization, not only in India proper but in those nations carved out of sub-continent in the 20th century.

The debate is part of events marking the beginning of formal relations between India and Great Britain in 1614 when King James I dispatched Sir Thomas Roe as ambassador to the court of Mughal Emperor Jahangir.

Sir Thomas had been sent to Agra to arrange for a Commercial Treaty and obtain security assurances on behalf of the burgeoning East India Company.

Emperor Jahangir was so pleased with the Treaty that he is said to have written James I with barely concealed enthusiasm: “For confirmation of our love and friendship, I desire your Majesty to command your merchants to bring in their ships of all sorts of rarities and rich goods fit for my palace; and that you be pleased to send me your royal letters by every opportunity, that I may rejoice in your health and prosperous affairs; that our friendship may be interchanged and eternal”

Incidentally, 1614 also saw the arrival in London of the first Indian man to set foot in Britain: an unnamed worker from Surat who was brought over in an East India Company vessel by a Company chaplain and who was promptly christened ‘Peter’ by King James.

The Empire Debate is one of a series of events organized by ‘Project 400’, an initiative by the Indo-British Heritage Trust which helps promote social, political and cultural ties between the two nations.