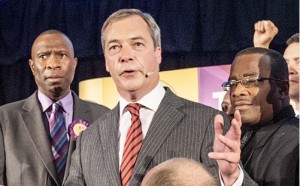 UKIP won the Essex seat by 12,404 votes, while Labour won the Heywood and Middleton by-election – beating UKIP by just 617 votes.

Mr Farage is campaigning ahead of the Rochester and Strood by-election reported BBC.

Tory and Labour MPs meanwhile have called for a response to UKIP’s surge.

Speaking on BBC’s Newsnight, Conservative MP John Baron said his party needed a “clearer direction, a clearer sense of what sort of Europe we want”.

He also refused to rule out following his former Eurosceptic colleagues by defecting to UKIP.

Mr Farage has said he expects more Conservative MPs to join UKIP following the defections of Douglas Carswell and Mark Reckless, which triggered the by-elections in Clacton and in Rochester and Strood.

The vote in Rochester and Strood is expected to take place early next month.

“You should never say never in politics but the bottom line is my very strong preference is to stay within the Conservative Party,” Mr Baron said when questioned.

Tory MP Jacob Rees Mogg renewed calls for a pact between the Conservatives and UKIP.

He told the Times newspaper that the impact UKIP has had on the Labour vote in northern England had been encouraging.

“We should think about what that means in terms of the UKIP-Conservative relationship because the Conservative family could win a majority on that basis,” he said.

“Otherwise, the only thing we manage is mutually-assured destruction.”

On Friday, Prime Minister David Cameron said next year’s general election would be “the most important in a generation” – warning that voters who switched support from the Tories to UKIP risked handing power to Labour.