Daily Mail, The Guardian,  Daily Mirror, The Times, The Sun were among the leading newspapers  focus on the death of teenage cancer fundraiser Stephen Sutton, from Staffordshire, who died in his sleep after raising more than £3m for the Teenage Cancer Trust. The Daily Mirror calls him a “credit to humanity”.

The Daily Mirror said the 19-year-old raised more than £3m for the Teenage Cancer Trust as it calls him “a credit to humanity”. That sentiment is echoed in many papers.

The Telegraph said his “Zest for Life” inspired a nation to give” and the Daily Mail calling him “a true inspiration”.

“I smile because I have a lot to smile about,” Sutton told Sun’s Christina Earle.  “I don’t think about my future and feel sorry for myself. I feel the opposite. My cancer has given me the opportunity to do something truly remarkable – and educate people about the disease.”

Guardian published Sutton performing some of his fundraising “bucket list” activities. It pictures him with celebrities who supported his campaign and captures their reaction to his death.

The Times said the Sutton campaign  “lifted Twitter and Facebook beyond the trivial… His greatest achievement was to mobilise a generation that is too often dismissed as jaded and self-interested. It is customary to talk of cancer victims losing their fight with the disease… Stephen Sutton may have lost his life but in several important respects he is still winning.”

The headline to the Daily Express’s editorial says simply: “What a fine young man.” 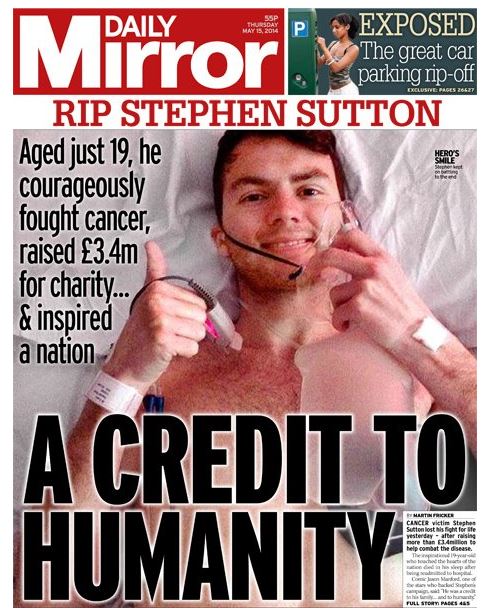