Unidentified vandals have defaced the statue of Mahatma Gandhi in Britain’s Leicester and engraved it with the slogans referring to anti-Sikh violence in India, a media report said. 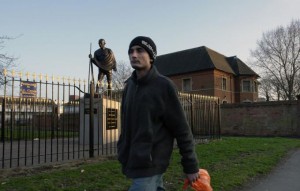 Vandals daubed the words, “Never forget 84” and “We want justice #84” in large letters on two sides at the base of the statue, Leicester Mercury reported Sunday.

Leicester City Council workers removed the graffiti from the plinth of the bronze monument Sunday morning.

Police have launched an investigation into the incident and have been treating it as criminal damage.

Indian-origin MP from Leicester East in England’s East Midlands, Keith Vaz said the culprits should be “absolutely ashamed of themselves”.

“People come from all over the world to pray at this statue and to daub it with graffiti which is political is an act of vandalism,” the report quoted Vaz as saying.

Surinder Pal, general secretary of the East Park Road Gurdwara, said he did not think anyone should be resorting to acts like this.

“There are ways of making people aware of what happened in 1984, but this is not one of them,” Pal added.