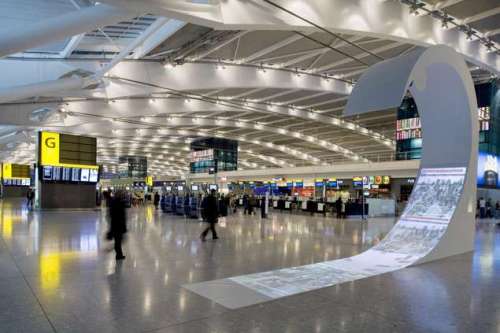 A Heathrow spokesman told Efe news agency that the new measures went into effect Tuesday morning and were being applied by the staff of Public Health England (PHE), the authority under Britain’s Public Health Service (PHS) that manages medical tests.

The measures were announced by the Secretary of State for Health, Jeremy Hunt, despite the fact that the British government had ruled them out last week, considering the risk currently posed by the virus to the country to be “low”.

Nurses and medical specialists from the health agency have been instructed to take the temperature of travellers coming from areas considered at risk, such as Sierra Leone, Liberia and Guinea Conakry.

These passengers must also complete a questionnaire that asks about their current health status, their recent travel history and whether they might be a potential risk through having had contact with Ebola patients.

It is expected that the controls will be implemented at Gatwick Airport and the Eurostar train terminal by the end of next week.

Health authorities have admitted that while it would not be possible to identify all travellers from the three most affected African countries (Sierra Leone, Liberia and Guinea Conakry), it is estimated that 89 percent will undergo these tests.

The screening measures might also be implemented in the northern cities of Birmingham and Manchester if the risk level should increase, they said.

Meanwhile, an Ebola patient who was flown from Liberia to Germany for treatment for the virus has died, officials at the St. Georg hospital in Leipzig said Tuesday.

The patient was a 56-year-old Sudanese worker for the UN and the third Ebola victim to be flown to Germany from Africa, Efe reported.

The patient had been airlifted from Liberia on a specially-equipped plane and was admitted to the St. Georg clinic, one of the seven hospitals in Germany that has isolation units for highly infectious diseases.

Germany has 50 beds ready for use by patients with Ebola and has four airports prepared to tackle suspected cases that can be found on board an airplane.

In a major setback to the fight against Ebola, Liberian health workers Tuesday began an indefinite strike demanding higher wages because of the high risk they face treating patients with the Ebola virus disease that has caused more than 2,200 deaths in the country.

The strike came after the expiry of an ultimatum given last week to the country’s health ministry for a salary hike and to reinstate two members of the Association of Health Workers who were dismissed in February for calling a strike.

Liberian Health Minister Walter Gwenigale promised that the health workers would receive “fair” wages, but ruled out any possibility of reinstating the dismissed officials.

“Those health workers who are insisting that their officials will have to be reinstated before they return to work should prepare to stay at home forever,” the Liberian minister threatened in a statement.

The Ebola epidemic that plagues West Africa, where it has killed more than 4,000 people since it erupted in March, has hit health workers who have contact with sick patients.

According to the World Health Organisation (WHO) a total of 233 medical and health workers have died in recent months in the region: 38 in Guinea Conakry, 95 in Liberia, five in Nigeria and 95 in Sierra Leone.

Although Liberia has declared a state of emergency and has implemented measures to combat the virus, the epidemic still continues to spread in the country.

In a related development, Spanish nursing auxiliary Teresa Romero remained in a stable but critical condition Tuesday as she entered the second week of her battle against the Ebola virus.

Romero, 44, is now at a stage where patients are usually able to start producing anti-bodies to combat the Ebola virus, vastly increasing their chances of survival, Xinhua reported from Madrid.

She first developed symptoms of the virus Sep 30, that means she is now in this situation, although she spent a “rather complicated night” Sunday, according to Teresa Mesa, a spokesperson for her family.

“She is in good spirits and speaking with her companions,” said Mesa.