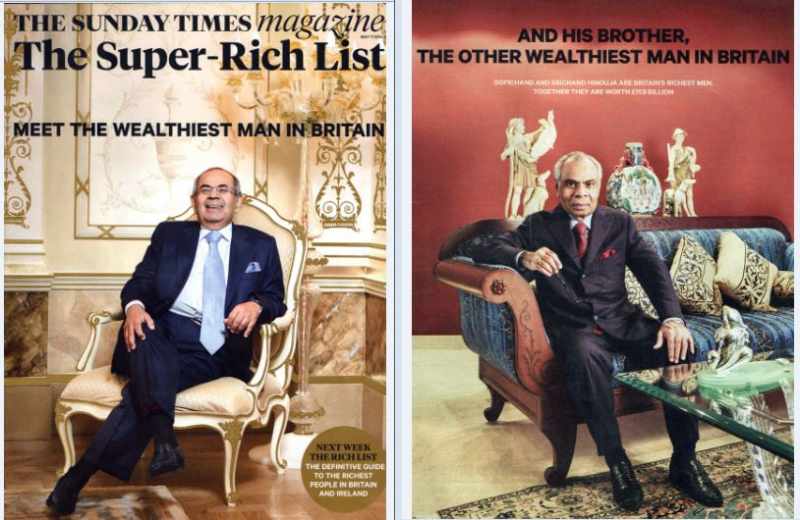 The Sunday Times Rich List are richer than they have ever been with a combined fortune of £519bn — equivalent to a third of the nation’s annual gross domestic product.

As people have seen their wages fall in real terms, The Sunday Times Rich List 2014, reveals that the 1,000 richest men and women have surged to new heights with their wealth rising by 15.4% on last year’s total of £449bn.

It means the wealth of the top 1,000 has doubled since the crash, rising from £258bn in 2009. Philip Beresford, who has compiled the list since 1989, said: “I’ve never seen such a phenomenal rise in personal wealth as the growth in the fortunes of Britain’s 1,000 richest people over the past year.”

“The richest have had an astonishing year, and while some may criticise them, many of these people are at the heart of the economy and their success brings more jobs and more wealth for the country,” Beresford said.

The increase in wealth means the top 64 names in the Rich List have a combined fortune of about £255bn — equivalent to the total wealth of the poorest 30% of the population. Among the familiar names of Sir Richard Branson, the Barclay brothers and Sir Philip Green — all in the billionaire category — there are newcomers from the online world.

John Roberts, creator of AO.com, an appliance retailer, comes into the Rich List for the first time with a fortune of £410m. The management of King, the company behind the Candy Crush Saga computer game, join the list, as do Sam and Dan Houser, who devised the controversial Grand Theft Auto computer game, which has made them £90m.

Women are still the poor relations in the list, with 114 in the top 1,000, up from 78 in 2004 but a drop from 118 last year. Many of the women have inherited money to thank for the place on the list, although Tamara Mellon (£180m), JK Rowling (£570m), Ann Gloag (£1bn) and Denise Coates (£1.2bn) are among those who have built fortunes in their own right or with other family members. The Rich List counters the view that most of Britain’s richest are dependent on inherited wealth. In fact, most of the names on the list earned their own fortunes.

Among the richest millionaires who will soon be advancing into the billionaire bracket are Princess Marie-Chantal of Greece (£985m), who is set to take over her father’s duty-free shopping empire. Others reflect the changing nature of the entrepreneurial class, among them Fred and Peter Done (£950m) who run the Betfred online gambling company.

The figures will give a boost to those who believe the recession is over and that rich people generate economic benefits for all. However, others will see such remarkable wealth as proof that Britain is becoming a more divided and unequal society and call for taxes to curb the wealthy.