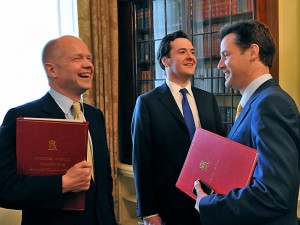 Even this modest growth in global wages was driven almost entirely by emerging G20 economies, where wages increased by 6.7 per cent in 2012 and 5.9 per cent in 2013.

By contrast, average wage growth in developed economies had fluctuated around 1 per cent per year since 2006 and then slowed further in 2012 and 2013 to only 0.1 per cent and 0.2 per cent respectively.

“Wage growth has slowed to almost zero for the developed economies as a group in the last two years, with actual declines in wages in some,” said Sandra Polaski, the ILO’s Deputy Director-General for Policy. “This has weighed on overall economic performance, leading to sluggish household demand in most of these economies and the increasing risk of deflation in the Eurozone,” she added.

“This report exposes the scale of the cost-of-living crisis under David Cameron’s Government.

“As the Autumn Statement showed the continuing squeeze on living standards is leading to a shortfall in tax revenues. And this is a key reason why George Osborne has broken his promise to balance the books.

“Labour’s economic plan will ensure we can earn our way to rising living standards for all and get the deficit down in a fair way. Our plan will raise the minimum wage, expand free childcare for working parents, get more homes built and cut business rates for small firms.

Labour productivity – the value of goods and services produced per person employed – continues to outstrip wage growth in developed economies, including in the most recent years. This continues a longer trend which briefly paused during the financial crisis years of 2008 and 2009.

The growing gap between wages and productivity has translated into a declining share of GDP going to labour while an increasing share goes to capital, especially in developed economies.

This trend means that workers and their households are getting a smaller share of economic growth while the owners of capital are benefitting more.

The report includes a detailed analysis of recent trends in household income inequality and the role played by wages in these trends.

Wages are a major source of household income in developed, emerging and developing countries alike, particularly for middle income households, while the top 10 per cent and bottom 10 per cent depend somewhat more on other sources of income.

In developed economies, wages frequently represent 70 to 80 per cent of household income in households with at least one member of working age.