The 2003 Iraq invasion is not to blame for the violent insurgency now gripping the country, former British prime minister Tony Blair said, according to media reports. 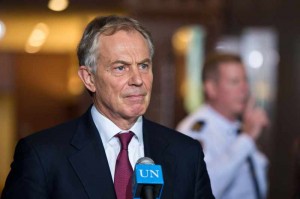 He writes on his website that the violence was the “predictable and malign effect” of inaction in Syria.

He said the idea that the current crisis was a result of the toppling of Saddam Hussein in 2003 was “bizarre”.

Blair added that the takeover of Mosul by Sunni insurgents was planned across the Syrian border, the report said.

The insurgents — from the Islamic State in Iraq and the Levant (ISIL) — have seized the cities of Mosul and Tikrit and are moving closer to Baghdad. They regard Iraq’s Shia majority as “infidels”.

Mr Blair, who is now Middle East peace envoy, argued there was no way Britain could stay out of Syria because “ultimately extremist groups also intend to target us”.

Mr Blair also took responsibility for the decision to go into Iraq in 2003.