“I am eagerly awaiting your arrival in Kyoto this weekend,” Shinzo Abe, Japan’s prime minister, tweeted last week to Narendra Modi, his Indian counterpart, after declaring, “India has a special place in my heart.” Previously, Mr Modi tweeted he was “particularly excited to meet” Mr Abe, stressing his “warm relationship” with the Japanese premier. Mr Modi is one of just three people Mr Abe follows on Twitter. 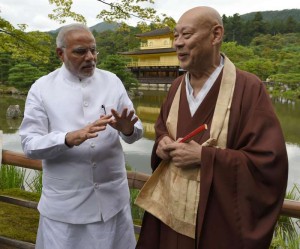 The Twitter exchange was a prelude to a big bear hug on Saturday, as Mr Modi, with a high-powered Indian business delegation in tow, began a five-day visit to Japan aimed at taking take his blossoming relationship with Mr Abe to the next level, says Financial Times in its analysis of modi’s Japan visit.

Saturday’s clinch outside the Kyoto State Guest House was remarkable for two reasons says the paper. Mr Abe, who normally receives dignitaries in Tokyo, had made a special trip to the ancient Japanese capital in what Kyodo news agency described as “an extraordinary gesture of welcome.”

“And by throwing his arms around his guest, the normally diffident Japanese premier marked a sharp contrast from the firm handshake with which he greeted US president Barack Obama in April.

“The Japanese and Indian leaders have much in common. As Ruchir Sharma, head of emerging markets at Morgan Stanley Investment Management, wrote, both are “conservative nationalists and pro-business reformers, who promised to restore national pride by reviving troubled economies.”

“But Mr Modi’s decision to make Japan his first foreign port of call beyond India’s immediate South Asian neighbourhood since his May election is based on far more than his personal chemistry with the Japanese premier. It is informed by hard-nosed calculations of how India and Japan can work together on undertakings of mutual interest and concern – reviving their respective economies, and grappling with Chinese expansionism, says the report.

“The Japan-India partnership holds the potential to shape Asian geopolitics in much the same way as China’s rise or Obama’s US ‘pivot’ to Asia,” Brahma Chellaney, a professor of strategic studies at New Delhi’s Centre for Policy Research, wrote in Japan’s Nikkei newspaper. New Delhi’s relations with Tokyo have none of the tensions that plague its relations China – with which India shares a long disputed border – or even the frictions of its relations with Washington. Between India and Japan, Mr Modi said on the eve of his visit, “there is only goodwill and mutual admiration.” He called Japan of “paramount importance” to his vision for India and the “peace, stability and prosperity of Asia at large.”

The two nations are still relatively minor trade and investment partners in trade. India bought just 1.2 per cent of Japan’s exports last year, while supplying just 0.9 per cent of its imports. Although Japanese investment in India has picked up sharply since 2007, the cumulative total is $15.1bn – just 1.4 percent of India’s total foreign investment, says the report.

“But that may be changing soon. For the past two years, exporters surveyed by the state-owned Japan Bank for International Cooperation have named India as their top FDI destination for the next decade. JBIC has taken a 26 per cent equity stake, and committed debt finance, to the ambitious Delhi-Mumbai Industrial Corridor, an attempt to upgrade infrastructure between the two cities.

Mr Modi is now looking to Japan to help him realise his goals of upgrading Indian manufacturing and infrastructure and improve the quality of its cities. The two countries are also expected to announce Japanese involvement in plans for a bullet train to link Mumbai and Ahmedabad, in Mr Modi’s home state of Gujarat.

Strengthening strategic and security cooperation is also very much part of the agenda, with such initiatives as joint exercises between the Indian coastguard and Japan’s Maritime Self-Defence Force. Tokyo hopes India’s visit will also result in a deal to export its amphibious US-2 aircraft for use in long-range surveillance, rescue and support, says the Financial Times.

In an interview with Jiji press on Friday, Mr Modi said that Japan’s recent easing of its self-imposed ban on weapons exports could usher in a “new era of co-operation in high-end defence technology and equipment.”

Little wonder, then, that there has been such a great public display of affection. A new alliance is taking shape, and both partners want the world to know it, Financial Times concludes.