The English jihadist who beheaded the American journalist James Foley is believed to be the leader of a group of British fighters holding foreign hostages in sources, the Guardian has said quoting sourcing. 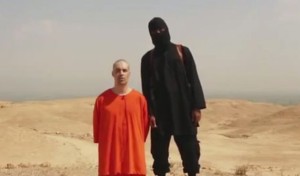 “As an international manhunt got under way on Wednesday, the English-speaking militant was identified to the Guardian by one of his former hostages as the ringleader of three British jihadists thought to be the main guards of foreign nationals in Raqqa, a stronghold of Islamic State (Isis) rebels.

“The militant who appeared on the Foley video, who called himself John and is believed to be from London, was said to be the main rebel negotiator during talks earlier this year to release 11 Islamic State hostages – who were eventually handed to Turkish officials after ransom demands were met, the report said.

The FBI, MI5 and Scotland Yard’s counter-terrorism command were all on Wednesday night racing to identify the militant who fronted the propaganda video that showed the brutal murder of Foley, the journalist who had been missing in Syria since 2012. Guaridan sources in Syria recognised the man as a point-man for hostage negotiations in Raqqa, where he is said to have held discussions with several families of jailed foreign nationals over the internet.

“One former hostage, who was held for a year in Raqqa, told the Guardian the British executioner is intelligent, educated and a devout believer in radical Islamic teachings. The three UK-born militants were referred to as “the Beatles” by fellow hostages because of their nationality,” the former captive added.

“Experts in the the counter-terrorism and linguistics fields said the man appeared to be one of up to 500 British-born jihadists “brutalised” by Isis after fleeing the UK to fight in Syria and Iraq. Security services in the UK and US were analysing the propaganda footage, with forensic phonetics experts among those thought to be involved in trying to identify the masked militant from his accent.”

Prof Paul Kerswill, a linguistics expert at the University of York, told Guardian he believed the man spoke in “multicultural London English” most commonly found in London’s East End. “He probably has a foreign language background but it sounds like multicultural London English, which is people from all kinds of backgrounds who mix in the East End, a new kind of cockney,” he said.

Dr Claire Hardaker, a linguistics experts at Lancaster University, studied the clip and told the guardian the man’s vowels marked him out as likely from the south-east of England, but most likely from London. “We’re definitely looking at a British accent, from the south, and probably from London, Kent or Essex.”

“The involvement of Scotland Yard in the international manhunt was seen as significant by counter-terrorism sources, who indicated that the man is likely to already be on the police radar, either through previous criminal behaviour or because he is known to be waging jihad overseas,” the report said.

Prof Peter Neumann, director of the International Centre for the Study of Radicalisation, at King’s College London, said an English-speaking militant was chosen deliberately to front the video to cause maximum impact in the west. “This is significant because it signifies a turn towards threatening the west. They are saying we’re going to come after you if you bomb us.”

Neumann said British fighters had been carrying out “horrific acts” like beheadings, torture and executions for a year and a half, but this appeared to be the first with a western victim. He added: “It’s not significant that British fighters have been beheading and torturing because that’s been happening for a year and a half. The significant thing is that this was an American and was connected to a direct message that ‘we are targeting you’.”