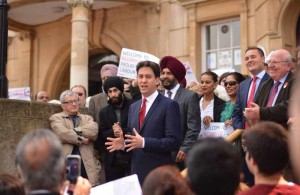 “I want to congratulate everyone in Redbridge who did the incredible job of winning majority control of the council for the first time in history for Labour. And I want to give the biggest round of applause for the new leader of Redbridge council, Jas Athwell.

Addressing that desire for change from Croydon to Cambridge, form Crawley to Hastings, from Amber Valley to Cannock. Right across Britain, people have been voting Labour because they want a country that is going to work for them and not just a few at the top. But we also know that Ukip made gains in this election. For some people, that discontent with the country, that desire for change, meant they turned to Ukip.

I believe the reason for that is because people feel we have an economy that doesn’t work for them and a politics that hasn’t listened to them. I want to say to those people today I understand your feelings. I understand your discontent. I am determined that Labour shows you, over the next 12 months how we can change your lives for the better.

How we are rooted in your experiences, your needs, and the things you’re facing in your life. Above all, I am determined that Labour shows that we can make this country work for people across Britain, for every person across Britain. That’s why I’m in the Labour Party; that is what the Labour Party stands for. And Labour will show, over the next 12 months how we can answer the call for change for every persona cross Britain. Thank you very much.”