Once in a while something truly rare, special and unique appears in the art market and the buzz being created at Bonhams by the sale of a small, fairly modest looking jar painted with a lotus motif from the Ming period, is tangible.  The jar comes from a European private collection and has not been seen at auction for over half a century. 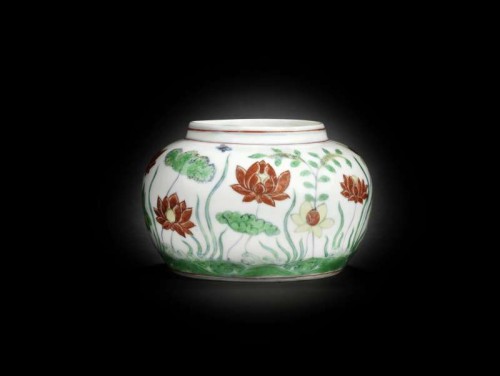 The ‘lotus pond jar’ is one of the top items in Bonhams next sale of fine Chinese Art on November 6th in New Bond Street, London. Estimated to sell for £400,000 to £600,000 it is evident that these figures may only be an indication of this prized jar’s value. Its sale coincides this year with the British Museums major exhibition on the art of the Ming dynasty.

The jar bears the mark of the Chinese Emperor Chenghua who ruled between 1464 – 1487. Earlier in the same century Chinese potters at the Imperial kilns began for the first time to write on top-quality vessels. And this mark is the ultimate sign of Imperial ‘quality control’.

For centuries most Chinese connoisseurs have considered Chenghua period ceramics as the finest ever created in China. The exceptionally clear glaze did not require heavy ornamentation but could be sparingly and elegantly decorated. The most sensational development in Ming Dynasty porcelain was the arrival of a lustrous white glaze on which to paint over a design for fixing in a secondary firing of the vase.

Adding to the romance, beauty and significance of this jar is the use of the lotus flower as a decorative device, something closely association with the Buddha.

The creamy white body is finely painted in a soft underglaze blue with delicate outlines further enamelled in rich iron-red, soft yellow, and vibrant green with an elegantly arranged profusion of variously opening lotus flowers and spreading and crinkling leaves. The masterful design is further highlighted by two small butterflies in flight.

Colin Sheaf, Head of Asian Art at Bonhams and the company’s Deputy Chairman and Asia Chairman, says: “Three decades in the Chinese Art trade does not entirely prepare you for an object like this. When I saw it for the first time, after years of storage, it had that certain something, that charisma of the truly spectacular object which creates a frisson of excitement in anyone who knows about Chinese porcelain. Its very simplicity is of course part of its charm, as this reflects the ambition of all great Chinese art.”