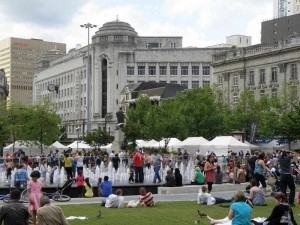 Only a month to go until the city centre becomes the region’s largest stage for one of the North West’s most anticipated outdoor events – Manchester Day!

Transforming the city streets with a riot of colour and a cacophony of music and sound, this year’s International Manchester Day will return on Sunday, 22 June.

Central to Manchester Day is the larger than life parade that will wind its way through the city centre starting at Liverpool Road at 1pm – but this year Manchester Day is so much more, with a vast array of entertainment and delicious foodie offerings in the city’s squares between 12pm and 6pm.

This year’s parade theme – Going Global – brings an international flavour to this year’s celebrations, asking participating groups to think of the many and varied ways Manchester has contributed to, and influenced, global trends – from music and sport, to science, industry and fashion.

In tune with the Going Global theme, the parade will be lead this year by a gigantic fish – called Gilly the Globe Fish – suspended high in the air and accompanied on the ground by a shoal of frolicking fish and dancing jellies.

The parade brings together nearly 2,000 participants representing more than 90 community and volunteer groups from across the city, with some of the best artists from the North West to create the larger than life artworks and floats that need to be seen to be believed.

Manchester Day, now in its fifth year, has become the city’s flagship summer event, attracting thousands of people to see the parade, but this year it’s so much more, with an enticing array of events in the city centre squares – including Albert Square, Great Northern Square, St Ann’s Square and Exchange Square.

Entertainment will include fantastic performances from some of the North West’s most talented musicians and performers, as well as mouth-watering food and drink from one of Manchester’s most innovative foodie collectives – Guerrilla Eats.

Cllr Pat Karney, Chair of Manchester Day, said: “Manchester Day is one of the events that children go mad for each and every year. Thousands of people turn out to see the mother of all parades through the city centre and each year the groups become more ambitious and spectacular.

“Gilly the Globe Fish, our lead float this year, will be travelling to Manchesters across the globe before arriving in the city centre to be star of the show. Be sure to follow Gilly the Globefish on twitter and send your encouragement #COMEHOMEGILLY !”

Cllr Rosa Battle, Manchester City Council’s executive member for culture and leisure, said: “Manchester City Centre is packed with families every year for Manchester Day and it’s the perfect opportunity to get everyone together and celebrate the best our city has to offer. The parade is only part of the fun, however, and the city’s square will have some of the region’s best entertainers and have on offer some delicious food and drink throughout the afternoon.”