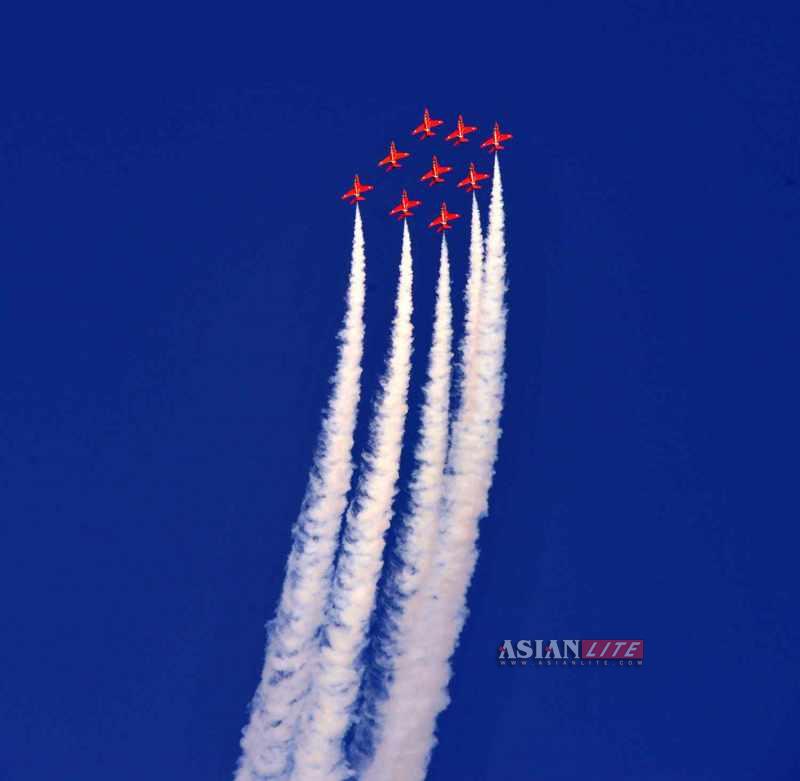 More than 300 airborne troops from the UK, France, Canada and the United States – and one 89 year old D-Day veteran – have this afternoon parachuted on to the fields of Normandy to mark D-Day 70, the 70th anniversary of the Normandy Landings.

Watched by HRH The Prince of Wales and the Chief of the General Staff General Sir Peter Wall, the spectacular display began with a jump by the Red Devils, the Parachute Regiment’s freefall display team. Among them making a tandem jump was 89-year old Jock Hutton, a veteran of D-Day who parachuted into France himself 70 years ago.

Then, after a flypast by two Spitfires from the RAF Battle of Britain Memorial Flight, 12 British paratroopers jumped from a Battle of Britain Memorial Flight Dakota, one of the original aircraft used for D-Day by airborne troops. Further jumps were made by troops from the UK, France, Canada and the United States from C-130 Hercules and other modern military aircraft.

The parachute jump commemorated the involvement of more than 20,000 Allied troops – including 7,900 British troops from 6th Airborne Division – who landed by parachute or glider in Normandy on the night of 5/6 June, ahead of the invasion force arriving on the beaches. Speaking after making the tandem jump, Jock Hutton, 89, said.

“I couldn’t see very much of anything on the ground, but I had a leg bag on me which landed before me and gave me full warning I was about to crash down.

We dropped very low, we didn’t stay in the air as long as we did today. The type of aircraft was very different to the C130.

We had a task to do, and that was foremost in our minds. Our main target was to liberate Ranville and we did that before first light.”

Piloting the Dakota over the Drop Zone was Flight Lieutenant Sebastien Davey. He said:

“As a transport pilot my role includes dropping parachutists on the front line but doing it in a Dakota over Ranville 70 years after D-Day was second to none and the pinnacle of my career.”

Flight Lieutenant Davey, who also co-pilots the Lancaster and is a tactical flight instructor for the C-130J Hercules, added:

“I can’t begin to imagine what the brave men of 1944 went through, flying low and at night, but it was an incredible honour to do this for them.”

Private Nick Rabson, of 16 Medical Regiment, jumped from the Dakota carrying the parachute wings worn by his grandfather Donald Rabson when he parachuted in to Normandy 70 years earlier.

“It was a very emotional experience to think I was jumping in to the same area that my grandfather did in 1944, although his jump was into hostile territory at night.

“He died last year and didn’t talk much about the war, but what he did say inspired me to become a paratrooper and I know he was proud thatI followed in his footsteps.”

The parachute descent was part of a series of events to mark the contribution of Airborne Forces to the invasion ofNormandy. The day began with commemorations at Pegasus Bridge, which was captured in a daring glider operation by 2nd Battalion The Oxfordshire and Buckinghamshire Light Infantry. There followed a veterans’ lunch, attended by Their Royal Highnesses The Prince of Wales and The Duchess of Cornwall.

Other events included services at Breville Les Monts and Merville, a Normandy Veterans’ Association event at Coleville Montgomery and a parade and service at the Royal Artillery Memorial at Le Breche.