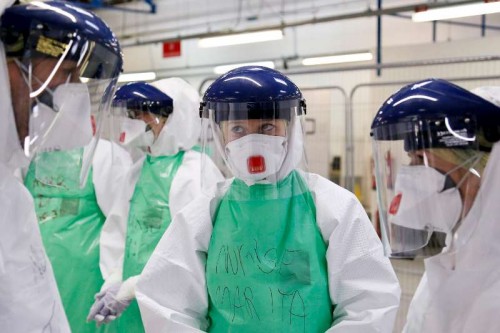 More than 30 NHS staff from across the UK will depart for Sierra Leone today to join Britain’s fight against Ebola, International Development Secretary Justine Greening and Health Secretary Jeremy Hunt have announced.

They are the first group of NHS volunteers to be deployed by the UK Government. After arriving in the capital, Freetown, early tomorrow morning where they will complete a week of training before moving to British-built Ebola treatment centres across the country.

Following this training and acclimatisation the group, which includes GPs, nurses, clinicians, psychiatrists and consultants in emergency medicine, will then begin work setting up procedures, diagnosing and treating people who have contracted the deadly virus.

They will work in treatment centres built by British Army Royal Engineers and funded by the Department for International Development.

“Our fight against Ebola in West Africa is one of Britain’s biggest responses to a disease outbreak. Almost a thousand military personnel, scientists, healthcare and aid workers are already on the ground in Sierra Leone working to contain, control and defeat this terrible disease.

“Every one of these NHS heroes will play a vital role in the fight against Ebola. It is only because of their combined efforts that we stand a chance of defeating this disease.”

“I want to thank the brave NHS volunteers who are heading to Sierra Leone today to help in the fight against Ebola. They embody the values at the heart of our health service, and their expertise and dedication is second to none.”

The NHS volunteers have been prepared for their deployment with nine days of intensive training at a specialist Ministry of Defence unit in York. This included operating in a replica treatment centre, with members of the Armed Forces training them in the different stages of assessment and treatment of the disease  Health Secretary Jeremy Hunt said.

On arrival in Sierra Leone, the team will join other international healthcare workers to undergo another week of intensive training funded by the UK to ensure they are equipped with the skills to safely treat and contain Ebola.

After this training, they will be deployed across Sierra Leone according to the staffing needs of the treatment centres built by the UK.

The next teams of volunteers are due to go out in stages in the coming weeks.

“I have been really impressed with the numbers of NHS workers who have stepped forward to help the communities that have been devastated by Ebola.

“The fact more than a 1000 have come forward so far is a real testament to their commitment to public service. I want to offer my thanks to all those that are going, their efforts will make a real difference in West Africa.” Chief Medical Officer, Dame Sally Davies said

Once they reach full capacity, the Ebola treatment centres will triple Sierra Leone’s bed capacity, bringing the total number of DFID-supported beds to more than 700. The UK already has one centre open at Kerry Town, which is being run by Save the Children. The remaining five will open in the coming weeks, providing essential care to those in need.

The centres will be staffed by a mix of local, international and NHS volunteer health professionals and run by a variety of organisations including GOAL, International Medical Corps, Medicos del Mundo, Solidarités International and Emergency. Cuba, Norway, Australia, New Zealand, and now Denmark have committed to providing significant numbers of health workers to staff UK treatment centres, alongside the NHS volunteers.

The deployment of NHS volunteers is part of wider UK efforts to control, contain and defeat Ebola. So far the UK has committed £230 million to the response in Sierra Leone.