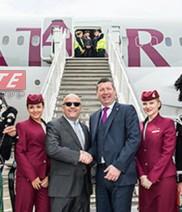 Qatar Airways,  has commenced services between Edinburgh and Doha. The inaugural flight, which landed into Edinburgh International Airport  was welcomed with a traditional water cannon salute, the classic sound of Scottish bagpipes and a gathering crowd within the airport terminal.

This new Scottish addition to the Qatar Airways route map is the airline’s 141st global destination and will significantly reduce journey times for those travelling from Edinburgh to locations around the world. With smooth and frequent connection times in Doha’s brand new Hamad International Airport, passengers flying from Edinburgh will now be able to arrive at their final destination, whether it be Doha in the Middle East or further afield, without the need for any domestic transfers within the UK.

Qatar Airways Chief Commercial Officer, Marwan Koleilat said: “We are delighted that our Boeing 787 Dreamliner aircraft has today commenced services to Edinburgh. We are sure that this will not only benefit the local market in Scotland, but also attract a significant amount of business and trade links for those wishing to travel to Edinburgh from all corners of the world.”

“The start of the service not only offers travellers from the Scottish capital access to the Middle East in under seven hours, but also a quicker total journey time to other popular destinations in Asia, India and Australasia, through our brand new airline hub, Hamad International Airport.”

The most popular destinations for those using the new route are likely to be in Asia and Australasia, with journey times to Melbourne reduced from approximately 26 hours with two transfers, to just 20 hours with one quick international transfer. Hamad International Airport, to which Qatar Airways moved all of its operations just yesterday, is the world’s newest airport and offers passengers an unrivalled travel experience.

The new Edinburgh route is not only the first for the city to the Middle East region, but will also be Edinburgh’s first scheduled service on one of the world’s newest aircraft, the Boeing 787 Dreamliner. The Dreamliner has a two-cabin configuration, comprising of 22 seats in Business Class and 232 Economy Class seats with a high standard of comfort on board, including individual 10.5 inch television screens for all Economy Class seats and a full complimentary food and beverage service.

Scottish Minister for External Affairs and International Development Humza Yousaf said: “Scotland and Qatar are both strong oil and gas producing countries and the relationship between our two countries has continued to strengthen over recent years. This service will help build on this important link and promote Scotland as a great place to do business. By removing the need for extra connecting flights, it will also make Scotland a more attractive destination for tourists.”

The schedule for the new route is as follows:

Gordon Dewar, Chief Executive of Edinburgh Airport commented: “This is a historic day, not just for our airport, but for the city of Edinburgh.

“The inaugural flight to Doha marks the first direct link from Edinburgh to the Middle East and means Scotland’s capital is finally connected with Asia, China and Australia. We are delighted to celebrate this occasion with our city partners, whose hard work has helped us reach this milestone.

“A direct link to Doha will not only enhance trade and culture links but will truly reaffirm Edinburgh Airport as where Scotland meets the world.”

Mike Cantlay, Chairman of VisitScotland said: “Bringing a mix of leisure and business travellers from right across the globe, this new route, between Doha and Edinburgh, is an unbelievable opportunity to open up Scotland even further to our key long haul and emerging markets.

“VisitScotland’s strategy is to develop Scotland’s air connectivity by partnering key global airlines. Qatar Airways is a member of the oneworld alliance and this service will ease access for millions of members across the Middle East, Asia, Australia, and Africa.

“Our analysis shows that this incredibly exciting new route will bring around £33m in projected revenue in the first year and £86m after three years. Indeed we anticipate that visitors from Qatar itself will be amongst our highest spending visitors. As Scotland welcomes the world in 2014 with Homecoming Scotland, the Glasgow 2014 Commonwealth Games and The Ryder Cup, there has never been a better time to visit this stunning country of ours and we cannot wait to welcome visitors from Qatar and beyond.”

Prior to the launch of services, Qatar Airways Chief Executive Officer, His Excellency, Mr. Akbar Al Baker conducted a number of high-level meetings with the Scottish First Minister Mr. Alex Salmond and the Lord Provost during a visit to Edinburgh. Scotland and Qatar have strong business ties already and this new route is likely.