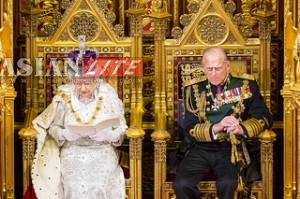 The Queen delivers the speech. It is written by the government and sets out its agenda for the parliamentary year.

This year’s Queen’s Speech contains a range of measures designed to support families, firms and fairness across Scotland, the Scottish Secretary said today. Nine of the eleven new Bills will apply in Scotland.

The UK Government’s legislative programme was announced during the State Opening of Parliament and contains measures to support families with childcare costs, small businesses with access to finance and give pensioners greater freedom to access their savings.
Alistair Carmichael said:” We are building on strong foundations for a prosperous and exciting future in Scotland. This legislation will help improve the lives of people across the country and lend a helping hand to working families and the businesses at the heart of our economy.

“At the same time we will further support the North Sea industry and give Scotland’s pensioners security and flexibility over their retirement funds. It is a comprehensive package for Scotland and I welcome the positive changes it will bring.”
Legislation such as the Childcare Payments Bill will see around 160,000 families in Scotland eligible for help with their childcare costs, up to a maximum of £2,000 per year for each child. Some 325,000 small and medium-sized businesses in Scotland will benefit from the Small Businesses Bill, making it easier for firms to access finance.

It also focuses on maximising our North Sea resources, powers to tackle serious crime across the UK and support for Armed Forces charities.

This parliamentary Session will also see the Government affirm its commitment to devolution by commencing vital provisions of the Scotland Act 2012.

This is the last legislative programme before the General Election in 2015 and underlines the Government’s commitment to economic growth and deficit reduction.

The speech also reiterated the commitment of the UK Government of making the case for Scotland to stay in the UK.

The Queen also pledged that Her Government will continue to work with the devolved administration in Northern Ireland to rebalance the economy, promote reconciliation and create a shared future.

Northern Ireland continues to benefit from the Government’s initiatives across the United Kingdom as a whole, including:having the most competitive business taxes in the G20
reducing the deficit by a third to keep mortgage and interest rates low, increasing the income tax threshold to £10,500, benefiting over 600,000 people in Northern Ireland
the abolition of national insurance contributions for the under 21s.

Secretary of State, Rt Hon Theresa Villiers MP said: “Today’s Queen’s Speech marks the next big step in our long term economic plan for the UK. Its aim is to ensure the recovery for our country, through a stronger, more competitive economy and a fairer society. The Speech includes a number of Bills of great importance to people in Northern Ireland, including cutting national insurance for businesses, helping families with the cost of childcare and reforming pensions to reward savers. It also reaffirms the Government’s commitment to rebalancing the Northern Ireland economy and building a shared future for all.”