Prominent business leader Dr Rami Ranger MBE is no stranger to receiving accolades commending his business achievement, and last week he added another award to his list of commendations. Dr Ranger was voted ‘Man of the Year’ at the GG2 Awards ceremony, and was presented with the trophy by the Rt. Hon. David Cameron MP, Prime Minister of the United Kingdom. 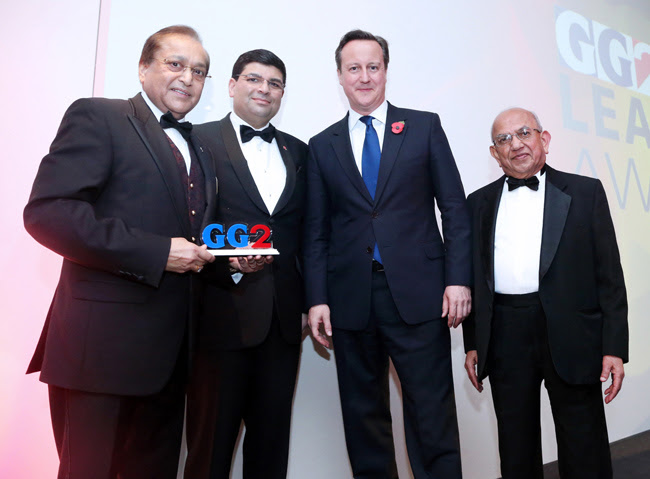 The GG2 Man of the Year Award is in recognition of consistent high achievement and Rami Ranger MBE was a worthy recipient. A successful entrepreneur, his company, Sun Mark, is the only company ever to have been awarded the Queens Award for Enterprise for five years running and he has now been honoured by the Queen on seven occasions, six times for business and once for community service.

Arriving in Britain in 1971 and with just two pounds, Dr Ranger held down a number of different jobs, but he had a burning ambition to create something of his own. He launched his first company Sea Air Land Forwarding Ltd which proved to be a huge success and enabled him to set up Sun Mark Ltd.

Dr Ranger attributes his achievements to a strong work ethic and unfailing support from his family, friends and employees. Commenting on his win, “The GG2 Leadership Awards are amongst the most prestigious there are. To be nominated for one of them is a great honour in itself. Any award and the recognition it brings encourages us to lead a more constructive life for the good of society as a whole.”

Speaking at the ceremony, the Prime Minister, David Cameron MP recognised the significant contribution made by British Asians and encouraged the younger generation to follow suit and aim high.

“I want the young Muslim girl to see Mishal Husain on TV and think she too can become a top broadcaster, the Pakistani teenager to hear Naughty Boy on the radio and consider a career in music, the budding journalist to read GG2 and Eastern Eye and want to follow in the incredible footsteps of Ramniklal Solanki.” He continued, “All of us here can think of someone who has inspired us to do what we’re doing right now. Well you can be that person to someone else out there, whether it’s speaking in schools, getting involved in charities or tweeting to your followers, and say “if I can do it then so can you”.

Cameron also paid tribute to the increasing number of Asian politicians saying “One day I want to hear that title ‘Prime Minister’ followed by a British Asian name.” Although he joked that not for a few more years.

Topping the Powerlist 101 this year was the Rt Hon Sajid Javid MP who takes the top spot from Malala Yousafzai, in the annual listing of the 101 most powerful and influential Asians living in the UK. Compiled by The Asian Media and Marketing Group (AMG), the list features the top 101 most influential Asians in the UK, ranging from all walks of life. Now in its fourth year, the list honours some notable British Asians who hold power and influence not just in Britain, but also globally.

The top ten of the Power List alone sees some distinguished names across different sectors including media and entertainment, politics and business. Last year’s number one, Malala Yousafzai moves down from the leading spot in favour of Mr Javid. Interestingly this year’s top 10 features a total of five leading politicians including Labour MPs Keith Vaz and Sadiq Khan at numbers 3 and 7, and Tory MPs Priti Patel and Shailesh Vara at numbers 6 and 9 respectively. Representing the business and finance industry, Lakshmi Mittal and the Hinduja brothers remain within the top 10, alongside One Direction star, Zayn Malik at number 10.

The media, arts and music industry have even stronger representation this year with BBC presenter Mishal Hussain leading the field and Amol Rajan, editor of The Independent climbing an astounding 41 places to number 16 in this year’s list. The list features a total of 30 individuals from the media and entertainment sectors including torchbearers like Meera Syal, Sanjeev Bhaskar, Krishnan Gurumurthy and Jay Sean, but also some interesting new faces including Great British Bake Off star Chetana Makan, Booker Prize nominee Neel Mukherjee and Sky News’s recently appointed Political Editor Faisal Islam.

As well as the music sector increasing its representation, this year’s list sees a total of 17 new entries that clearly shift the balance of power amongst the industry’s stalwarts. These new entries sit alongside well-known faces in the community who have made phenomenal contributions to their areas of expertise. Cricketer Moeen Ali, one of only two sportsmen featured in the list this year enters at number 28, alongside charity campaigners Aneeta Prem and Praful Patel.

Girl Power is alive and kicking this year, with a total of 19 women featured in the list. This year’s women are fairly evenly split between the worlds of politics, campaigning and the media & entertainment industry. Many of the women in the list this year are household names, from BBC Breakfast presenters Naga Munchetty and Jameela Jamil to musician Anoushka Shankar as well as leading campaigners and vocal voices of Shami Chakrabarti and Yasmin Alibhai Brown – this year’s list sees strong, dedicated women standing strong.