It took Chris Hallett, 44, four months to reach Brazil Monday after setting off from London. 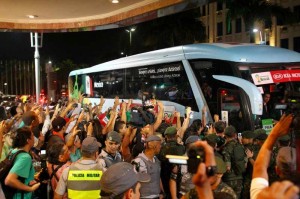 Chris said his trip had been “exhausting but exhilarating”.

“I am a bit knackered. My backside definitely feels like I have ridden 15,000 miles,” he was quoted as saying in the London Evening Standard.

He said: “Obviously, the easier option would be to fly to Brazil and sit on a beach waiting for the World Cup to begin. But where’s the fun in that?”

Hallet has a ticket to cheer on Roy Hodgson’s side against Costa Rica in Belo Horizonte June 24.

Hallett gave up his IT career and is using his life savings to fund his ‘Scooters for Goalposts’ ride in aid of charity UNICEF.

The Fulham fan has passed through 18 of the 32 countries competing in football’s showpiece event, staging penalty shoot-outs at iconic stadiums along the way.