The Ritz casino has won a court battle to recover £1m from a wealthy gambling addict who failed to pay money she owed. Noora Abdullah Mahawish Al-Daher, who is married to the foreign minister of Oman, lost £2m in the London casino during an evening of gambling but only paid half of the debt, leading to the high court dispute, a Guardian report said. 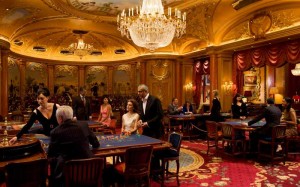 “Cheques which she signed on the evening of 3 April 2012 in return for gambling chips were dishonoured, the court heard. A few months later, she and her family gambled away £3m  in Las Vegas. Mrs Al-Daher, who is known to western acquaintances as Nora, argued that the casino had been “under a duty of care” towards her as its staff knew she was a gambling addict or problem gambler and should have restrained her from betting, the report added.

“A claim by the Ritz had been based on “illegality” and the unlawful giving of credit, she claimed. Her lawyers argued that signs of her addiction were apparent both through how much she gambled in the period leading up to that evening, on the evening itself, and by what she said. High court deputy judge Seys Llewellyn QC ruled there was no legal authority that supported her case and gave judgment to the casino “in the sum of £1m, as claimed”, plus interest.

“I hold that there was no unlawful giving of credit to Mrs Al-Daher,” he said.” The judge said he had no doubt that, if Mrs Al-Daher had been refused permission to carry on gambling at the Ritz casino, she “would have been eager and inclined to gamble at other casinos thereafter, and very probably during her stay in London during the days or weeks after 3 April 2012”.

“It is striking that she and her family gambled away $5m in Las Vegas in June some two to three months later,” he said.

“Mrs Al-Daher is married to Oman’s foreign minister Sayyid Badr bin Hamad bin Hamood Al-Busaidi. The judge described her as “a woman of great wealth”. He said it came from family funds in Saudi Arabia from her late father, whilst her husband was wealthy in his own right from business interests in Oman and through a Saudi Arabian conglomerate, teh Guardian report said.

“Judge Llewellyn rejected Mrs Al-Daher’s counter-claim to recover the £1m of her debt she had paid in December 2012. On the evening she lost the £2m she had signed and given individual cheques for £200,000 and £300,000 in return for gambling chips. The judge said it had been her habit to sign cheques to the casino for such sums, but the cheques signed that evening were dishonoured. In December 2012 she paid £1m to the casino but left £1m outstanding and it was that amount the casino was entitled to recover,” she said.