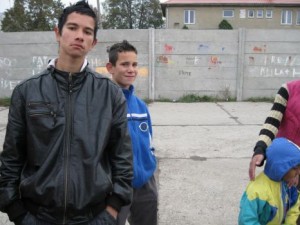 Page Hall in Sheffield has seen a huge influx of Slovakian Roma, who say they want to give their children the chance of a better future in the UK. But rubbish, noise and gangs of young people have put them on collision course with other residents

A crime crackdown has been launched in a deprived Sheffield suburb which residents claims is being blighted by intimidating groups on street corners, nuisance motorists, litter and fly tipping.

Fed up residents in Fir Vale and Page Hall attended a public meeting to raise concerns with police and council officers, claiming an influx of migrants has left services unable to cope.

They claim schools and GP surgeries are full to capacity and that ‘intimidating’ groups hang around on street corners reports The Star.

The meeting heard muggings and fights are rife and there has been an increase in rubbish – creating an impression of a suburb in decline.

Resident James Thornton, aged 24, who attended the Police and Communities Together public meeting, said: “There has been a vast increase in the migrant population which has had a knock-on effect in terms of the cleanliness of the area and crime.

“Litter has increased, there have been increases in muggings and violent crime and the over-riding opinion here is that we want an action plan to address all these issues.

“One of the main concerns is intimidating groups on the streets all day, yet you never see a police officer.”

Long-standing resident Jonathan Green said: “For 37 years it has been quiet and pleasant, however for the last three it’s been nothing short of a living hell.”

Inspector Simon Leake, of South Yorkshire Police, said extra patrols had been put on and he was hoping to put a ‘dispersal order,’ in place giving officers the right to split up groups and take children home.

“The issue is more about increases in pressures on services, a lot of problems stem from that,” he added.

‘We are fully aware of the issues in page hall’, says councillor

Sheffield Council said it was committed to reducing the anti-social behaviour problems in Page Hall.

Coun Mazher Iqbal, the council’s cabinet member for communities, said: “We are fully aware of the issues in Fir Vale and Page Hall .

“Anti-social behaviour is not acceptable and not something anyone should have to tolerate.

“We are working closely with residents, businesses and partners to nip in the bud any possible tensions before they escalate out of hand.

“In recent weeks, we have been leading on a number of initiatives including taking action to clean up the area and helping local people to take pride in their neighbourhood.

“We are also consulting on a plan to introduce tighter regulations on landlords and we are working with the police and communities to help people feel safe.”

South Yorkshire police says it doesn’t have crime figures available for Page Hall specifically, but that anecdotally crime does not appear to have increased significantly since large numbers of Slovakian Roma started to move in three years ago. “It’s anti-social behaviour which is a problem rather than crime, really,” said one of the officers on patrol.

Nobody knows for sure how many Roma people have come to Sheffield since Slovakia joined the EU in 2004. The council’s best guess is that 1,500 eastern European Roma children now live in the city as a whole, with around 500 in the small Page Hall area. Miroslav Sandor, a Roma community worker in Page Hall, gives a much higher estimate. He thinks there may be 600-900 large families in the city, mostly concentrated in Page Hall.