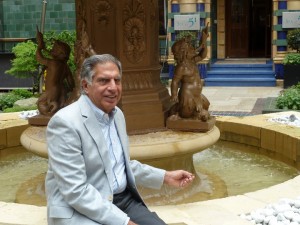 The normally unstated Tata Group  hosted a spectacular reception, the first event of its kind, at London’s celebrated Science Museum.

Over 700 heads of business, British members of parliament and Tata executives from across Europe came together to demonstrate the commitment and capabilities of Tata companies in Europe.

It was a gentle and sophisticated reminder about the Tatas’ 12 billion pound investment in Britain in the past decade.

Welcoming guests, David Landsman, director of Tata Limited, said: “Tata is recognised in Britain by the government and a wide range of stakeholders as a major investor. In particular, the success of Jaguar Land Rover (JLR) has won huge respect for the group and Ratan Tata’s strategic vision.”

“Beyond JLR, we are known as a significant player in a wide range of sectors through the acquisition of British household names such as Corus (now Tata Steel) and Tetley Tea, as well as through our ‘organic’ businesses such as Tata Consultancy Services (TCS) and the Taj properties in London,” he said.

“Today, (Tata) group companies make a major contribution to the economies of Britain, France, Germany and the Netherlands and are present across the continent.”

The evening showcased self-learning cars from Jaguar Land Rover, but also a Tata Motors small car at a development stage, which could be launched in Britain within the next two years.

At present, the only western European country importing Tata cards from India is Italy.

A short film, “Showcasing Tata in Europe”, screened for the guests was an impressive production.

Tata Limited has existed in Britain since 1907, when it played an important role in procuring equipment for some of Tata’s biggest projects in India.