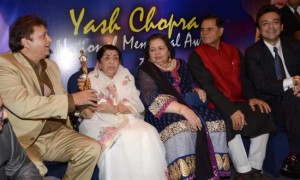 The death of Yash Chopra in 2012 left the Bollywood film industry bereft of its most iconic filmmaking talent.

Now the life and work of the legendary writer, director and producer is set to come into focus during a unique event on 07 June, as part of the 16th annual Tongues on Fire London Asian Film Festival: Europe’s oldest and most respected showcase for independent South Asian arts and cinema.

‘Remembering Yash Chopra’ will see Pam Chopra, the late director’s wife, in conversation with  Rachel Dwyer, the respected Professor of Indian Cultures and Cinema at London’s School of Oriental and African Studies (SOAS) and an authority on the work of Yash Chopra, having penned a comprehensive biography on the filmmaker a decade before his passing.

Veteran actor Anupam Kher, who appeared in a string of Yash Chopra productions, including such famous films as ‘Darr’, ‘Dilwale Dulhania Le Jayenge’, ‘Mohabbatein’ and ‘Lamhe’, to name but a few, will also make a special appearance during the event, to be held at the prestigious British Academy of Film and Television Arts in London.

The evening promises a unique and unprecedented insight into the two most important aspects of Yash Chopra’s life: his cinema and his family.

Writing soon after the director’s passing, Professor Dwyer said: “The work of Yash Chopra is one of the glories of Indian film, his career bridging the Hindi cinema of the 1950s and the globalising India of today.  Nothing made him happier than making films; then having his family and friends around him for a great meal: “Family, films and food”. His wife Pamela was the centre of his world and his strength.”

Pam Chopra, who married Yashji in 1970, was the filmmaker’s closest confidante and most scrupulous critic and worked variously as a producer, writer and costume designer on a number of her husband’s most memorable hits, including ‘Kabhie Kabhie’, ‘ Silsila’ and ‘Dil To Pagal Hai’; all that whilst forging a successful career in her own right as a playback singer.

Titled ‘The Master Stroke’, Singh’s film delves into Yashji’s use of the ‘Navarasa’ – the nine essential emotional themes that are the fundamental building blocks of Indian art – in the unforgettable and timeless music that became the cornerstone of his films.

The evening will be capped off by another documentary charting Yashji’s phenomenal career in Bollywood and a performance by Mrs Chopra herself.