The sheikhs and the Council of Ministers in the UAE congratulated Sheikh Mansour bin Zayed, the Deputy Prime Minister and Minister of Presidential Affairs, who owns Manchester City. The gulf news dailies were in all praise of Manchester City owner.

“Ending our season in Abu Dhabi is the perfect way to celebrate our double trophy win,” the club captain Vincent Kompany told The National daily newspaper from Abu Dhabi.

Thursday’s event will also feature a wide range of activities and entertainment, with live music provided by the Emirati singer Eidha Al Manhali, appearances by footballing world record holders, carnival acts, dancers and drummers. Manchester City captain Vincent Kompany told the club’s supporters that this season’s double success would just be the start as they paraded the Premier League and League Cup trophies in front of their jubilant fans. 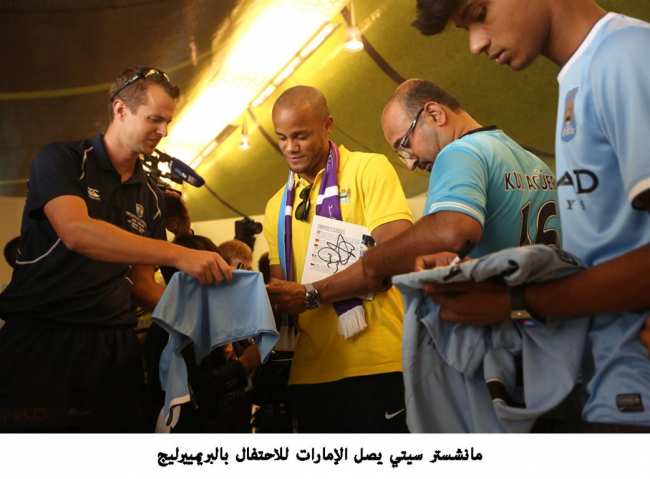 Thousands gathered in Albert Square where players and staff were introduced to the crowd while fans watched videos on a giant screen recalling City’s triumphant season, which also saw them beat top-flight rivals Sunderland to win the League Cup final at Wembley in March. Before the City squad boarded the bus, skipper Kompany addressed the crowd and told them his team were far from satisfied with their silverware haul. “This is a team that is growing and we have done it in style,” Kompany said. “Everyone keeps saying, ‘They have won the league and they have done it in style’.

“That is what I like about it. That is what I want us to do again in future, keep winning in style,” added the Belgian defender, who scored City’s second goal against the Hammers. Asked if more trophies were on the way to Eastlands, Kompany replied: “Has to be more, always more.”