Campaigners have criticised private firms for using immigration detainees as cheap labour inside detention centres after research suggested this saves them millions of pounds. Some detainees said they were being paid as little as £1 an hour to cook and clean, according to a Guardian report. 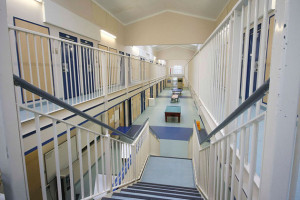 Home Office figures showed that in May this year, detainees in centres run by Serco, G4S and other contractors did nearly 45,000 hours of work for a total of nearly £45,500 in pay. Had they been paid at the nationalminimum wage, the cost would have been more than £280,000. Over 12 months, the figures suggest that the firms – which also includeMitie and GEO – could have saved more than £2.8m, according to research group Corporate Watch, which obtained the data, and said firms were “exploiting their captive migrant workforce”, says the report

The Home Office insisted, however, that detainees had a choice whether or not to work and that inspectors had praised the practice of allowing them to work while they await removal from the UK. One female detainee, who spent months in the Yarl’s Wood centre in Bedfordshire, where she was employed as a cleaner, said she believed the detainees were being used to do essential work in place of staff paid the minimum wage, the report added.

Another detainee, Ralph Ojotu, who works as a cleaner in Harmondsworth detention centre, said that it was hypocritical of the British government to ban him from working to support his two children in the outside world, but to allow him to be employed on around £1 an hour in a detention centre run by its contractor GEO, says the report.

“We are not allowed to work out there, but in here, they are handing out jobs like pieces of cake,” he said.

“The figures relate to seven centres: Yarl’s Wood and Colnbrook, which are operated by Serco; Brook House and Tinsley House, which are run by G4s; and Harmondsworth and Dungavel, which are managed by American firm GEO. The seventh centre, Campsfield, is run by Mitie. Two government-run centres, Dover and Morton Hall, also employ detainees on £1 per hour, potentially saving more than £1.4m per year, it added.

Phil Miller, a researcher at Corporate Watch, said: “These companies are potentially saving millions of pounds by exploiting their captive migrant workforce on a grand scale. Our research has shown that the detention centres would grind to a halt without the amount of essential work done by detainees on a daily basis – cooking and cleaning.”

“The status of immigration detainees held in centres while their cases are decided is distinct from that of convicted prisoners. Yet, like prison inmates, they do not qualify for the national minimum wage. They are also barred from any other form of work, yet must pay for essential goods such as toiletries. The latest financial figures from G4S in the UK and Ireland show that the company made £122m in pre-tax profit in 2013, while Serco made £106m in the same period. Mitie’s accounts show it made £127.5m in the 12 months to June 2014, while GEO’s US-based parent, GEO Group Inc, reported £184m in pre-tax profit.”

On behalf of the firms, a Home Office spokesman said: “The long-standing practice of offering paid work to detainees has been praised by Her Majesty’s inspectorate of prisons as it helps to keep them occupied whilst their removal is being arranged. Whether or not they wish to participate is entirely up to the detainees themselves. This practice is not intended to substitute the work of trained staff.”

Wyn Jones, of Serco, said the paid work was voluntary and in accordance with Home Office rules. He added: “It is offered to residents alongside other constructive activities to help reduce boredom and improve mental health and, if not conducted, would have no effect on the running of the [centres]. Serco refutes any implication that we use residents to conduct work in place of officers or staff at any of the IRCs that we manage and thereby increase profits.”